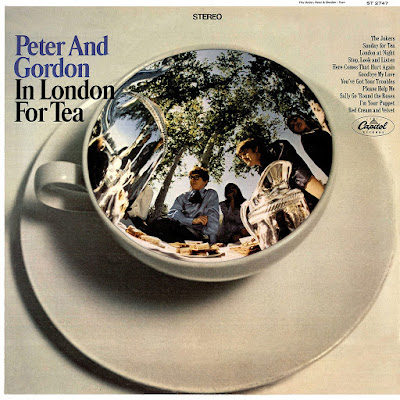 When In London for Tea was issued in 1967, many of Peter & Gordon's peers from the first wave of the British Invasion -- foremost among them their sometime-hit song suppliers, the Beatles -- were changing and innovating new styles at a furious pace. In that environment, this album seemed an outdated exercise in treading water, with the duo neither advancing their sound nor finding particularly interesting material. Perhaps that was inevitable for an act that, on this LP at least, didn't write any of their own songs with the exception of Gordon Waller's country tune "Red, Cream and Velvet." But although it did include their final U.S. Top 40 hit in the quaintly bouncy, overtly British "Sunday for Tea," the album was otherwise a patchy mix of soul, orchestrated ballads, and mild British Invasion pop. It was also populated with too many covers of then-recent hit records, among them the Searchers' "Goodbye My Love," the Fortunes' "You've Got Your Troubles," James & Bobby Purify's "I'm Your Puppet," the Jaynetts' "Sally Go 'Round the Roses," and Hank Locklin's country smash "Please Help Me, I'm Falling." The duo do sing well throughout, and if you just love their harmonies and Gordon Waller's melodramatic lead vocal style, that might be reason enough to find and enjoy this record. 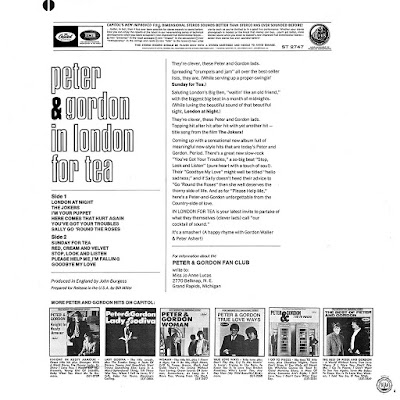