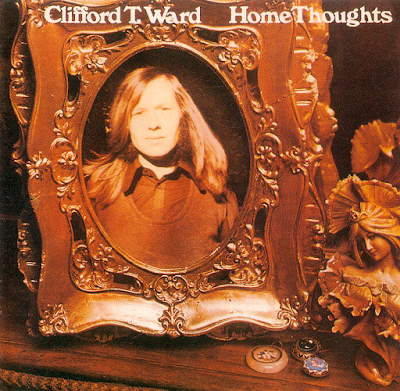 In 1973 a Bromsgrove schoolteacher with unfeasibly long hair seemed to have the whole pop music world at his feet. His debut Charisma single, "Gaye", had reached the Top Ten during the summer, his critically lauded second solo album, "Home Thoughts" had swept into the Top 40, he'd made several television appearances and his blend of shrewd storytelling and stunningly evocative melodies had made him an innovative alternative to the glam rockers. All the music papers were falling over themselves to interview this unique new singer songwriter. He had managed to garner the acclaim of the serious music press and yet still become something of a darling in teenage magazines like Jackie and Music Scene. When his third single for Charisma, "Scullery" reached Number 37 in the singles chart at the dawn of 1974, not even the most pessimistic observer would have thought this would be Clifford T. Ward's last ever U.K. chart appearance.
It can therefore come as a surprise to discover that Clifford T. Wmoreard has continued to write and record distinctive music since the early 70s when he was one of Tony Stratton-Smith's flagship acts, and that his songs have been covered by artists as diverse as Judy Collins, Ringo Starr, Cliff Richard and Jack Jones. He has maintained his love of capturing within his strikingly original narratives, fragile vocals and mesmerising melodies, the attitude of ordinary people at work, at play and in love. His quintessentially "English" music defines its own genre but file with Pulp, The Kinks, Morrissey, Vaughan Williams, Bragg and The Beatles, if you insist.

The biggest surprise may well be that his desire to keep producing memorable music is as strong as ever despite suffering from multiple sclerosis for the past thirteen years. Ward's popularity with collectors is on the increase, yet ironically he feels little benefit since he is lucky to get any of the large sums of money which are changing hands for second-hand original copies of material from a quite remarkable body of work, much of which has played no part in the CD reissue boom. 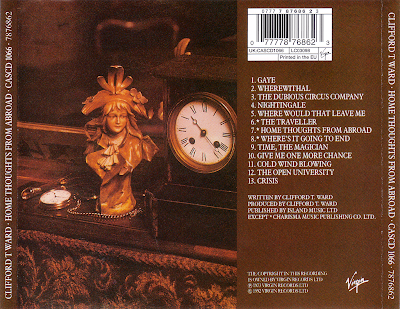 Right in the middle of glam rock 1973 came a homely singer/songwriter from the small village of Stourport near Birmingham named Clifford T. Ward who took the charts by storm with a simple love song, "Gaye," telling the age-old story of a girl and how much she meant to him. This was like a breath of fresh air in the overproduced mid-'70s by its very nature. For here was a man who told simple stories, with beautiful melodies, played with the minimum of fuss. Hot on the heels of the single "Gaye" came his second album, Home Thoughts, which Ward was heavily involved with writing and producing, as well as playing keyboards. Home Thoughts opened with the lovely ballad "Gaye" and continued in the same vein as the single with piano backed ballads sung with clear, concise lyrics, reflecting Ward's homespun family thoughts, living as an ordinary man with a wife and three children, spurning the attention from the media, refusing to tour or play any live gigs that would take him away from his family, and also shying away from the pop press, interviews, and photographs, except when absolutely necessary. Clifford T. Ward had been working as an English teacher at a local school and it was here he developed his love of poetry and words, an asset he brought to his songs, especially "Where Would That Leave Me" and "Time the Magician," "Home Thoughts from Abroad," and "The Open University" in which he namechecks his favorite authors, and "Wherewithal," a song he wrote simply because he liked the sound of the word. But for all the beautiful songs on Home Thoughts, the standout track is the hit single "Gaye" with its instantly memorable singalong melody.