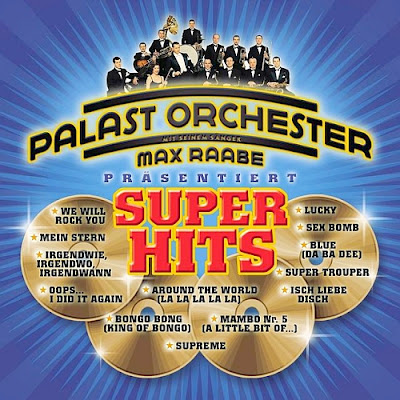 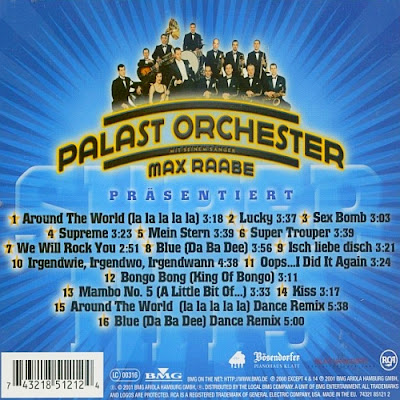 The Palast Orchester (literal translation, Palace Orchestra) is a German orchestra, based in Berlin, constituted in the manner of dance bands of the 1920s and 1930s. Its repertoire specialises in cabaret and popular songs of the Weimar period in Germany and in American popular songs of the same era. The orchestra performs around 120 concerts per year.
Max Raabe founded the orchestra with fellow students at the Berlin University of the Arts in 1985. The ensemble initially used music arrangements that Raabe found whilst shopping at various flea markets. The orchestra worked for one year on learning these arrangements without any public engagements or performances. The orchestra gave its first public performance at the 1987 Berlin Theaterball, in the lobby as a secondary act, but with such success that the audience left the ballroom to hear the orchestra's performance in the lobby. The ensemble had its first song hit 5 years later, an original song by Raabe, "Kein Schwein ruft mich an". The members of the orchestra are all men, with the single exception of the violinist, who has always been female. In addition to its performances of vintage German and American popular songs, the orchestra has also performed contemporary music in the same musical style as the earlier songs, including covers of songs by Britney Spears, Tom Jones, Salt'n'Pepa, etc. The orchestra made its Carnegie Hall debut in 2005. The ensemble returned to Carnegie Hall in November 2007, and the performance was recorded for commercial release on the album "Heute Nacht oder nie - Live In New York". The orchestra returned to Carnegie Hall in March 2014.