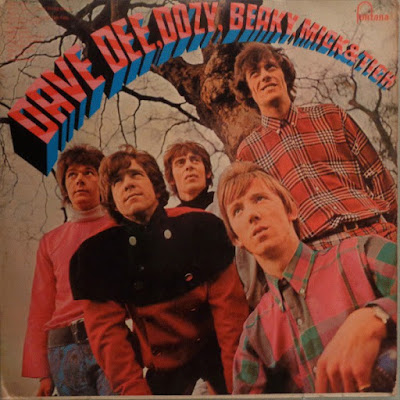 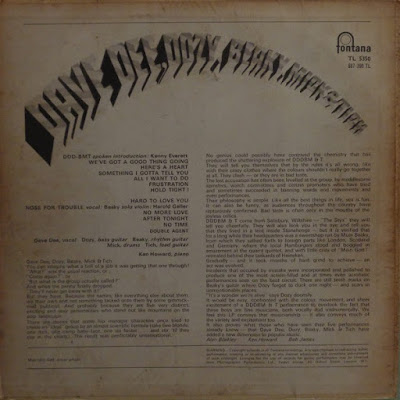 Dave Dee, Dozy, Beaky, Mick & Tich were a British pop/rock group of the 1960s. Two of their single releases sold in excess of one million copies each, and they reached number one in the UK Singles Chart with the second of them, "The Legend of Xanadu"

Five friends from Wiltshire, David John Harman (Dave Dee), Trevor Leonard Ward-Davies (Dozy), John Dymond (Beaky), Michael Wilson (Mick) and Ian Frederick Stephen Amey (Tich), formed a group in 1961, originally called Dave Dee and the Bostons. They soon gave up their jobs (e.g. Dave Dee was a policeman) to make their living from music. Apart from performing in the UK, they also occasionally played in Hamburg (Star-Club, Top Ten Club) and in Cologne (Storyville). Ward-Davies had acquired his nickname when he unwrapped a chocolate bar before absent-mindedly discarding the bar and attempting to eat the wrapper.

Vocalist Dave Dee, the ex-policeman, was at the scene of the motoring accident that took the life of the American rock and roller Eddie Cochran and injured Gene Vincent in April 1960.

In summer 1964, the British songwriters Ken Howard and Alan Blaikley became interested in recording them. The band was set up in the studio to make recordings with Joe Meek. These recording sessions failed to get off the ground as an interview with Dave Dee stated that Meek "had very strange recording techniques. He wanted us to play the song at half speed and then he would speed it up and put all these little tricks on it. We said we couldn't do it that way. He exploded, threw coffee all over the studio and stormed up to his room. His assistant [Patrick Pink] came in and said, 'Mr Meek will not be doing any more recording today.' That was it. We lugged all our gear out and went back home". While these recording sessions proved unsuccessful they eventually gained a recording contract with Fontana Records.

Ken Howard said that: "We changed their name to Dave Dee, Dozy, Beaky, Mick and Tich, because they were their actual nicknames and because we wanted to stress their very distinct personalities in a climate which regarded bands as collectives." The distinctive name, coupled with well produced and catchy songs by Howard and Blaikley, quickly caught the UK public's imagination and their records started to sell in abundance. Indeed, between 1965 and 1969, the group spent more weeks in the UK Singles Chart than the Beatles[citation needed] and made the odd tour 'down under' to Australia and New Zealand, where they had also experienced some marked chart success during this period.

They also scored a Number One hit in the UK Singles Chart in 1968 with "The Legend of Xanadu". The combined sales figures were in excess of one million copies. Their other top 10 UK hits included "Hideaway", "Hold Tight!", "Bend It!", "Save Me!", "Touch Me, Touch Me", "Okay!", "Zabadak!" and "Last Night in Soho".

"Bend It!" was a big hit in Europe, including a Number One in Germany. To obtain a bouzouki sound on the recording, an electrified mandolin was used. The song was inspired by music from the film sound track of Zorba The Greek. The combined UK and European sales were over one million. However, in October 1966, the British music magazine NME commented that dozens of US radio stations had banned the record, because the lyrics were considered too suggestive. The group responded by recording a new version in London with a different set of words, which was rush-released in the US, as the original single was withdrawn from sale. "Bend It!" was later used in an episode of the American animated sitcom Futurama entitled "The Mutants Are Revolting".

The band were big sellers elsewhere in the world, particularly in British Commonwealth countries. In New Zealand, the group had three number one hits, and 7 other songs reached the top 10. In Australia, they reached the top 10 with "Hold Tight!", "Bend It!", "Zabadak!" and "The Legend of Xanadu". In Canada, the band scored two top 10 hits with "Zabadak!", which reached #1, and "The Legend of Xanadu", and hit the top 30 with "Break Out"—a song that didn't chart in any other country.

In the US, the group failed to break out nationally, although they had regional successes, particularly in northeastern cities such as Cleveland, Buffalo, Syracuse, Albany and Boston where both "Bend It" and "Hold Tight" gained considerable airplay and charted in the top 10 on local radio stations. "Zabadak" gained extensive US airplay during winter 1967–68, climbing top 10 in several major US markets including Los Angeles, but despite pockets of radio exposure, the band never gained mass airplay in America; "Zabadak" was the band's only single to chart in the national Billboard Hot 100, where it peaked at No. 52. This is at least partially a result of both the band's US labels, Fontana and Imperial Records, failing to secure them a US tour or TV appearances. Fontana set up just two appearances on national US TV programs. These were in July 1966 ("Hold Tight" on Where the Action Is) and Piccadilly Palace on 26 August 1967 (performing their then-current single "Okay"). Imperial scored none.

In September 1969, Dave Dee left the group for a short-lived solo career. NME reported the previous month that Dave Dee was to play a motorbike gang leader in the forthcoming Marty Feldman film Every Home Should Have One. The rest of the band, re-billed as (D,B,M and T), continued releasing records until they broke up in 1972. In the 1980s the group reformed again without Dave Dee, although there was one further single with him, "Staying with It", a cover of the Firefall song in 1983. In the meantime Dave Dee had become a record producer with Magnet Records.

In the 1990s, they started performing once more, this time with their one-time leader, Dave Dee. Dave Dee was a J.P. in Cheshire until he retired from the bench in 2008 due to his failing health. He continued to perform with his band almost up until his death on 9 January 2009. He had been suffering from prostate cancer since early 2001.

With Ray Frost as the new "Tich" the band, still including two original members, pledged to continue. However Trevor Ward-Davies (Dozy) died on 13 January 2015, aged 70, after a short illness. He is survived by his wife, Yvonne.