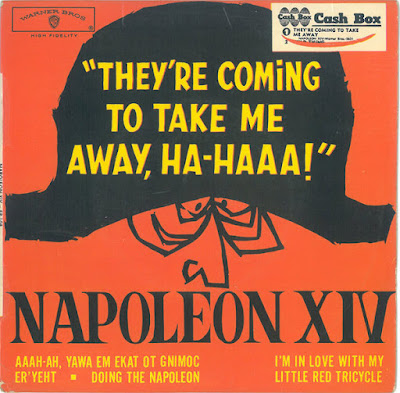 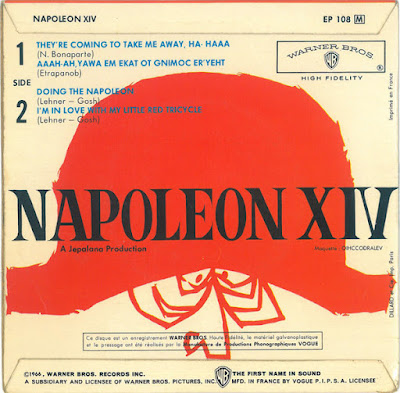 They're Coming to Take Me Away, Ha-Haaa! is a 1966 novelty record written and performed by Jerry Samuels (billed as Napoleon XIV), and released on Warner Bros. Records. The song became an instant success in the United States, peaking at No. 3 on the Billboard Hot 100 popular music singles chart on August 13, number 1 on the Cash Box Top 100 charts, number 2 in Canada, and reaching No. 4 on the UK Singles Chart.
The lyrics appear to describe a man's mental anguish after a break-up with a woman, and his descent into madness leading to his committal to a "funny farm" (slang for a mental hospital). It’s finally revealed in last line of the third verse that he’s not being driven insane by the loss of a woman — but by a runaway dog: "They'll find you yet and when they do, they'll put you in the ASPCA, you mangy mutt". According to Samuels, he was concerned the record could be seen as making fun of the mentally ill, and intentionally added that line so "you realize that the person is talking about a dog having left him, not a human". Said Samuels, "I felt it would cause some people to say 'Well, it's alright.' And it did. It worked."
The song is driven by a snare drum, tambourine and hand clap rhythm. The vocal is spoken rhythmically rather than sung melodically, while the vocal pitch rises and falls at key points to create an unusual glissando effect, augmented by the sound of wailing sirens.
According to Samuels, the vocal glissando was achieved by manipulating the recording speed of his vocal track, a multitrack variation on the technique used by Ross Bagdasarian in creating the original Chipmunks novelty songs. At the time the song was written, Samuels was working as a recording engineer at Associated Recording Studios in New York. Samuels discovered he could use a Variable Frequency Oscillator to alter the 60Hz frequency of the hysteresis motor of a multitrack tape recording machine in order to raise or lower the pitch of a voice without changing the tempo. This gave him the idea for a song based on the rhythm of the old Scottish tune "The Campbells Are Coming". After recording a percussion track at the standard speed, he played it back through headphones while recording the vocal on another track and gradually adjusting the VFO and the pace of his vocals to produce the desired effect. Some tracks were treated with intermittent tape-based echo effects created by an Echoplex. Samuels also layered in siren effects that gradually rose and fell with the pitch of his vocals.
Continuing the theme of insanity, the flip or B-side of the single was simply the A-side played in reverse, and given the title "!aaaH-aH ,yawA eM ekaT oT gnimoC er'yehT" (or "Ha-Haaa! Away, Me Take to Coming They're") and the performer billed as "XIV NAPOLEON". Most of the label affixed to the B-side was a mirror image of the front label (as opposed to simply being spelled backward), including the letters in the "WB" shield logo. Only the label name, disclaimer, and record and recording master numbers were kept frontward. The reverse version of the song is not included on the original Warner Bros. album, although the title is shown on the front cover, whereas the title is actually spelled backward.

In his Book of Rock Lists, rock music critic Dave Marsh calls the B-side the "most obnoxious song ever to appear in a jukebox", saying the recording once "cleared out a diner of forty patrons in three minutes flat."
The song charted at No. 3 on the Billboard Hot 100 charts on August 13, number 1 on the Cash Box Top 100 charts on July 30, number 2 in Canada, and reaching No. 4 on the UK Singles Chart.

Within weeks of its release, WABC and WMCA stopped playing the song in response to complaints about its content from mental health professionals and organizations. The BBC also refused to play the song.

Warner Bros. Records reissued the original single (#7726) in 1973. It entered the Billboard Hot 100 at number 87 but stalled at number 101 at the Week Ahead charts which was an addition to the Cash Box Top 100 charts. The reissue featured the "Burbank/palm trees" label. As with the original release, the labels for the reissue's B-side also included mirror-imaged print except for the disclaimer, record catalog, and track master numbers. The "Burbank" motto at the top of the label was also kept frontward as well as the "WB" letters in the shield logo, which had been printed in reverse on the originals.