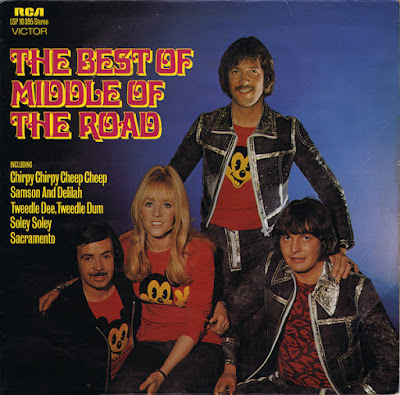 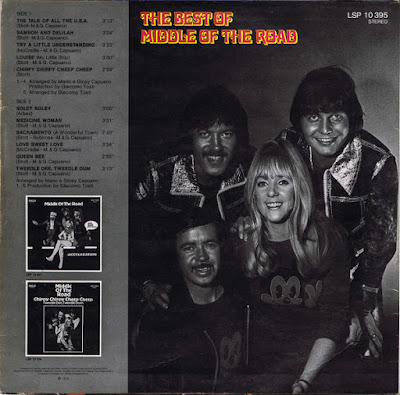 Middle of the Road is a Scottish pop group who have enjoyed success across Europe and Latin America since the 1970s. Before ABBA established themselves in the mid 70s, Middle of the Road were the sound of early europop with their distinctive harmonies and lead vocals from Sally Carr. Four of their singles sold over one million copies each, and received a gold disc: "Chirpy Chirpy Cheep Cheep". "Sacramento", "Tweedle Dee, Tweedle Dum" and "Soley Soley". By early 1972 the group had sold over five million records.

Original lead singer Sally Carr, drummer Ken Andrew, guitarist Ian McCredie and his bassist brother Eric McCredie, founded the band on 1 April 1970 in Glasgow, Scotland. They had already played together under the name Part Four since 1967 and later in Latin American style under the name Los Caracas. Under the name Los Caracas they won the UK TV talent show Opportunity Knocks. They moved to Italy in 1970 because they had not found success in the United Kingdom. There they met the Italian music producer Giacomo Tosti, who gave the band their distinctive sound and gave them their international break.

The band had their first and biggest hit record in the United Kingdom with debut UK single, "Chirpy Chirpy Cheep Cheep" to reach #1 in the UK Singles Chart in June 1971 and keep it for four more weeks. In all, Middle of the Road had five hit singles in the UK during 1971-1972. The band had especially strong success in Germany, where they achieved eleven Top 40 hits in 1971-1974. As an example of this, Frank Valdor was fast to adapt Sacramento as his "party records". Chirpy Chirpy Cheep Cheep and Sacramento were played a lot on Scandinavian radio. In the Dutch Daverende 30 the group had four number 1 hits in the period 1971-1973.

In 1974 early Bay City Rollers member Neil Henderson joined the band on guitar. He wrote and co-wrote songs for Middle of the Road (including the singles "Rockin' Soul" and "Everybody Loves a Winner" and 1974 albums, You Pays Yer Money and You Takes Yer Chance and Postcard, all released in Germany via Ariola like their first German LP, Music Music).

Current Activity
In 2016, Middle of the Road's founding guitarist Ian McCredie received a Lifetime Achievement Award at the Scottish Music Awards in Glasgow. In 2017, Middle of the Road released their first single in over 20 years, a live recording of their 1970's hit Soley Soley, performed in front of 20,000 people in Berlin's Waldbühne amphitheatre.

tags Middle Of The Road