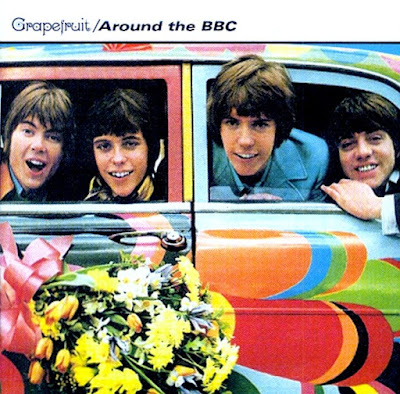 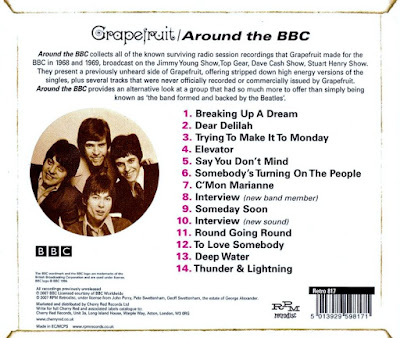 Grapefruit only made a couple of albums in the late '60s, but they got to do a number of BBC sessions, probably because their connection to the Beatles initially excited a lot of media interest. Around the BBC has a dozen tracks they recorded for the radio network between January 1968 and July 1969, as well as some brief interview banter. Though this might be considered somewhat of a frivolous release by nonspecialists given the group's marginal impact on the British psych-pop scene, it actually turns out to be a pretty valuable supplement to their studio discography. For one thing, the sound is very good, the recordings somehow having been preserved in quite fine condition. Of yet more importance, no less than five of the 12 songs were not included on Grapefruit's official releases. These include not only three originals by George Alexander ("Breaking Up a Dream," "Somebody's Turning on the People," and "Trying to Make It to Monday"), but also covers of the Bee Gees' "To Love Somebody" and Denny Laine's "Say You Don't Mind." All of the Alexander compositions, especially the buoyant "Breaking Up a Dream," are -- like much of Grapefruit's debut LP, Around Grapefruit -- quality period British psych-pop, if more Beatlesque pop/rock than out and out psychedelia, and not quite up to the level of the Bee Gees (let alone the Beatles). Too, only two of the tracks are from the disappointing heavy rock phase they entered for their second album, and even the songs available in studio versions on the earlier Grapefruit versions are notably less ornate in these radio performances. Capped by good liner notes from Apple Records scholar Stefan Granados, it's a worthwhile package for this minor but decent group that helps give listeners a more rounded picture of the band's sound and repertoire than is available from Grapefruit's slim body of studio work.