Continuing The International EP Collections Is...... 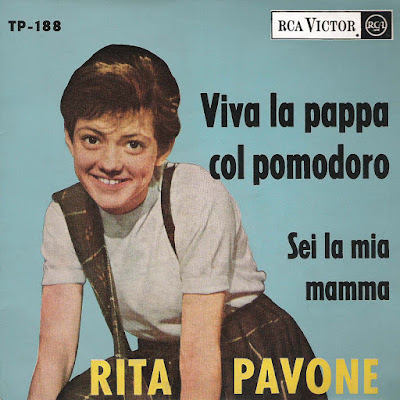 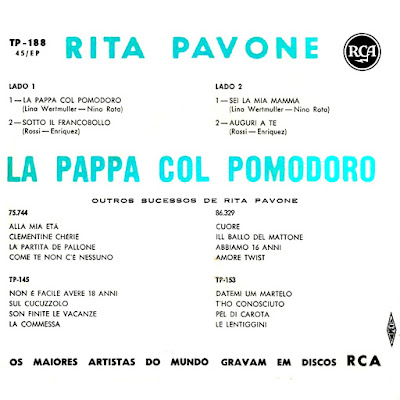 Singer Rita Pavone was one of the biggest teenage stars in Europe during the 1960s, and one of the few Italian pop stars to gain a foothold in the American market, scoring a Top 30 hit with the single "Remember Me" and making a number of appearances on The Ed Sullivan Show. Pavone was also one teenage idol who moved gracefully into a lasting career as an adult, both as a vocalist and as an actress. Pavone was born in Turin, Italy on August 23, 1945. Her father, who worked at a Fiat auto plant, was a big fan of American musical stars, particularly Al Jolson, Judy Garland, and Gene Kelly, and young Rita shared his tastes, often singing along with his records and taking singing lessons when she wasn't busy with school or her part-time job ironing shirts. In 1959, Rita made her public debut as a singer, impersonating Al Jolson in a children's talent contest; by this time, rock & roll had made its way to the continent, and she became an immediate fan of the new teenage sounds. In 1960, Pavone landed her first professional gig, performing for soldiers at Italian NATO bases, and after initial attempts to score a record deal or nightclub engagement proved fruitless, Pavone got her big break in the fall of 1962, when she took part in La Festa Degli Sconosciuti ("Festival of the Unknown"), a nationwide talent search launched by singer and record producer Teddy Reno. Pavone won first prize and was awarded a management contract with Reno and a record deal with RCA Italiana; her first single, "La Partita di Pallone" b/w "Amore Twist," was an immediate smash, selling over a million copies, and Pavone signed on as a regular performer on the popular Italian television variety series Studio One. Pavone's first album, simply titled Rita Pavone, was released in November 1962, and spawned two more hit singles, "Come Te non c'è Nessuno" b/w "Clementine Chèrie" and "Alla Mia Età" b/w "Pel di Carota." The A-side to the second single was also the theme song to a French comedy of the same name, which featured Pavone in a small role. In 1963, an EP of material from her first album was released in Spain; it became a smash hit, and the country would prove to be one of her biggest markets. Pavone's second album, Non e Facile Avere 18 Anni (aka "It's Not Easy to Be 18"), was released in the summer of 1963 and became another major hit, featuring the smash single "Cuore" ("Heart"), and Rita's 18th birthday party in August was a media event, featured in a television special on RAI-TV. After successfully expanding her European following with a German-language hit, "Wenn Ich Ein Junge War," Reno and Pavone set their sights on the United States, signing a stateside deal with RCA-Victor and beginning work on an English-language album, recorded in New York. In May 1964, Pavone's American debut album, The International Teenage Sensation, was released, and the single "Remember Me" became a hit, rising to number 26 on the Billboard singles charts; the record also fared well in Canada, where the flipside, "Just Once More," went to number 13 on the charts of CHUM-AM, Toronto's biggest pop/rock station. On May 17, 1964, Pavone made her first appearance on The Ed Sullivan Show, the most popular variety show on American television; it was the first of four appearances on Sullivan's program, and she was also featured on the rock-oriented shows Shindig and Hullabaloo. In October 1964, she released her second American album, Small Wonder (the title referring to her diminutive stature), which did not fare as well on the charts as her first U.S. LP, and Pavone returned to Italy to appear on the television serial Il Giornalino di Gian Burrasca, for which she also contributed several songs. Pavone's popularity in Europe was as strong as ever; when she entered the hospital for an emergency appendectomy in September 1964, she received get-well cards from 13 million fans. While Pavone's American career faded out after the release of the album This Is Rita Pavone in 1965, she hit the British charts with "Curoe" in 1966, and the same year she became a movie star in Europe with the release of Rita La Zanzara, a comedy in which she played a music student in love with her professor, who unknown to her is living a double life as a rock & roll singer; the film was directed by Lina Wertmuller, who became a celebrated figure in the 1970s with the release of Swept Away and Seven Beauties. "Little Rita" starred in four more films over the next two years, but her career was touched by scandal in 1968 when she married Teddy Reno, who was 19 years her senior and previously married. As Italy did not recognize divorce at the time, Reno was technically a bigamist in his homeland when he and Pavone were wed in Switzerland; after Italy's marriage laws changed, the two renewed their vows in 1971 and have been together ever since. In 1970, Pavone returned to the Italian charts with "Zucchero," which became a Top Ten hit, and she continued to record periodically through the '70s and ‘80s, making occasional television appearances, and dividing her time between Italy and Switzerland, establishing herself as a mature and respected song stylist. Pavone also revived her career as an actress, appearing in a number of motion pictures and playing Maria in a celebrated stage production of Shakespeare's Twelfth Night. In 2006, she announced her official retirement from show business, though her recordings from the '60s are still regularly reissued in Europe and her debut American album was released on compact disc through Real Gone Records in 2012.