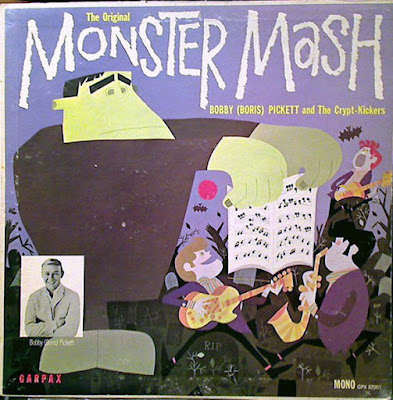 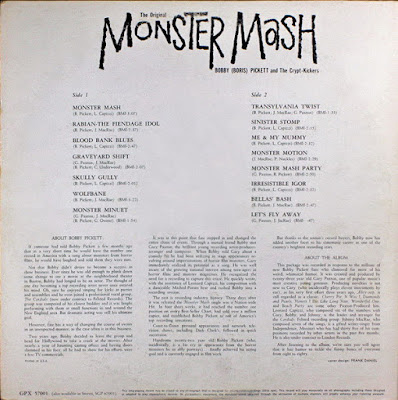 "Monster Mash" is a 1962 novelty song and the best-known song by Bobby "Boris" Pickett. The song was released as a single on Gary S. Paxton's Garpax Records label in August 1962 along with a full-length LP called The Original Monster Mash, which contained several other monster-themed tunes. The "Monster Mash" single was #1 on the Billboard Hot 100 chart on October 20–27 of that year, just before Halloween. It has been a perennial holiday favorite ever since.

Pickett was an aspiring actor who sang with a band called the Cordials at night while going to auditions during the day. One night, while performing with his band, Pickett did a monologue in imitation of horror movie actor Boris Karloff while performing the Diamonds' "Little Darlin'". The audience loved it, and fellow band member Lenny Capizzi encouraged Pickett to do more with the Karloff imitation.

Pickett and Capizzi composed "Monster Mash" and recorded it with Gary S. Paxton, pianist Leon Russell, Johnny MacRae, Rickie Page, and Terry Berg, credited as "The Crypt-Kickers". (Mel Taylor, drummer for the Ventures, is sometimes credited with playing on the record as well, while Russell, who arrived late for the session, appears on the single's B-side, "Monster Mash Party".) The song was partially inspired by Paxton's earlier novelty hit "Alley Oop", as well as by the Mashed Potato dance craze of the era. A variation on the Mashed Potato was danced to "Monster Mash", in which the footwork was the same but Frankenstein-style monster gestures were made with the arms and hands.

The producers made extensive use of foley art for the recording; the sound of a coffin opening was imitated by a rusty nail being pulled out of a board. The sound of a cauldron bubbling was actually water being bubbled through a straw, and the chains rattling were simply chains being dropped on a tile floor.

The song is narrated by a mad scientist whose monster, late one evening, rises from his slab to perform a new dance, with a name implying it is inspired by the Mashed Potato, a popular dance of the early 1960s. The dance becomes "the hit of the land" when the scientist throws a party for other monsters, among them classic 1940s horror film icons such as the Wolfman, Igor, Count Dracula and his son. In addition to narrating the song in the Karloff voice, Pickett also impersonated fellow horror film actor Bela Lugosi as Count Dracula with the line, "Whatever happened to my Transylvania Twist?" The mad scientist says that the dance has been replaced by the Monster Mash, which Dracula embraces by joining the house band, the Crypt-Kicker Five. The song closes with the mad scientist inviting "you, the living" to the party, without specifying where.
The song was rereleased several times and appeared in the U.S. Billboard charts on two occasions after the original release: August 1970 and May 1973. The BBC had banned the record from airplay in 1962 on the grounds that the song was "too morbid". It was re-released in the United Kingdom in 1973, where it peaked at #3 in early October. In the U.S. the record re-entered the Hot 100 on May 5, 1973, peaking at #10 on August 11. On the edition of September 15, 1973 of American Top 40, Casey Kasem mistakenly said that the record had accumulated 40 weeks on the Hot 100, which then would have been the all-time record, only for a listener to inform Kasem later that the record's three weeks on the Hot 100 in 1970 had been included in the 1973 run, thus reducing the total to 37 weeks. The record has not charted on the Hot 100 since then.

To celebrate the 1973 release, Bobby and the Crypt-Kickers toured Dallas and St. Louis around the 1973 Halloween holiday. On this tour, the Crypt-Kickers were composed of Brian Ray (now guitarist with Paul McCartney), drummer Brian Englund, keyboardist Don Chambers, singer Jean Ray, and others. "Monster Mash" re-entered the British charts again on November 2, 2008 at #60.

"Monsters' Holiday", a Christmas-themed follow up, was recorded by Pickett and released in December 1962, peaking at #30 on the Billboard chart. The tune was penned by the renowned novelty song composer Paul Harrison.

In 1985, with American culture experiencing a growing awareness of rap music, Pickett released "Monster Rap", which describes the mad scientist's frustration at being unable to teach the dancing monster from "Monster Mash" how to talk. The problem is solved when he teaches the monster to rap. A movie musical based on the song starring Pickett was released in 1995. During the 2004 presidential election, Pickett turned the song into a campaign video and retitled it "Monster Slash," with lyrics by environmental campaigner Peter Altman, in which he critiqued President George W. Bush's environmental policies.

In 1989, Stuart Hersh began managing Pickett, and upon learning Pickett did not own the master recording to “Monster Mash,” the pair in 1993 recorded a perfect copy of the original “Monster Mash” that they then used to undercut the owners of the track, Universal. According to Hersh, the company was unconcerned with the song’s legacy and was instead “preoccupied with how much money they could get off (the song).” Pickett was missing out on thousands in licensing fees, but Hersh and Pickett’s goal was not just to make money. They sought instead to help keep “Monster Mash” relevant: by ensuring “Monster Mash” would be affordable to independent production houses, they ensured it would always have a place in culture.

The "Transylvania Twist", mentioned in the lyrics of "Monster Mash", was written into a full song for the film Spookley the Square Pumpkin (which Pickett narrated) and performed by The Honeydoos, a Pointer Sisters-like girl group of singing melons.

The backing singers for the record were The Blossoms, led by Darlene Love.

Do I Press Here?