Continuing The International Singles Collection is..... 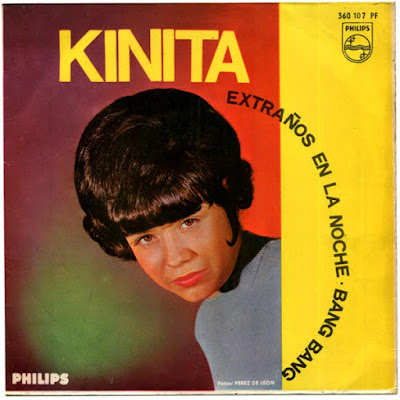 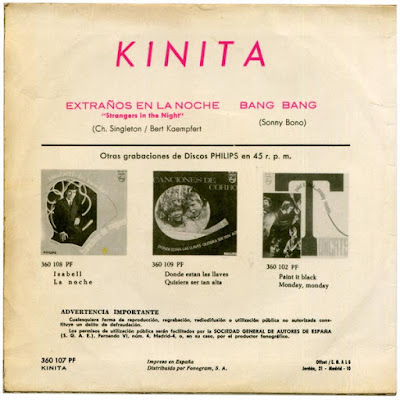 Loved and derided in equal measure for her elaborate hairdos, Spain’s Kinita has become a cult star. Undeniably, her status owes a large debt of thanks to her final single, the kitsch classic Yo-yo ye-yé.

Though little is known about Kinita, the singer is thought have hailed from Madrid.

By the mid-1960s ye-yé girls were all the rage in Spain, covering UK and US hits for the domestic teen market. All the major record companies had at least one on their roster, but Philips had lost Li Morante and bosses at the label were looking for a replacement. Kinita offered the answer to their prayers.

She signed to the label in 1965 and was swiftly dispatched into the recording studio. Four-track EPs were the standard format for releases at the time, and Kinita’s debut disc led with Ya te tengo, a version of Sonny and Cher’s worldwide chart topper I got you babe.

The release was a mixed bag. While a take on Marisol’s El cochecito, penned by beat combo Los Brincos, and Do re mi, a song also recorded by Britain’s Dusty Springfield, proved its other highlights, a version of the childish Sacré Charlemagne – a French hit for Parisian star France Gall – was little better than the original. That the sleeve pictured Kinita with some not-very-groovy-looking dancers probably didn’t help its chances on the record-shop shelves and the disc soon found itself in the bargain bins.

A second raid on Cher’s catalogue saw Bang bang become the title track of Kinita’s follow-up EP, issued the following year. Perhaps the most surprising cut on the release was Hasta el final del día, her take on The Kinks’ Till the end of the day. Like her debut, however, the disc floundered upon release.

Indeed, this is true of all of Kinita’s records – fame eluded her at the time, though she achieved some notoriety for her numerous and complicated hairdos, earning herself the nickname ‘the princess of lacquer’.

Her second EP of 1966 offered a change of tack, with the dramatic Quédate picked as the lead track. Te veré en septiembre, a version of US group The Happenings’ See you in September, also charmed fans, though it was Extraños en la noche, a take on Frank Sinatra’s Strangers in the night, that was lifted from the EP for release as a single.

An appearance at the Benidorm festival in 1966 raised the singer’s profile.

An EP was issued to cash in on her appearance. Petula Clark’s reluctance to re-record her material in Spanish had left the door open for Spain’s own singers to fill the breach – which is how Kinita came to perform ¿Qué haría yo?, a version of the Jackie Trent-penned What would I be, at the contest.

With no hits to her name, Kinita took a year out, but returned with what has become the best known of her repertoire, 1969’s Yo-yo ye-yé. “No one can be a ye-yé without playing with a yo-yo. The yo-yo of the ye-yés, the ye-yés of the yo-yos,” she trilled. The song has earned the singer a cult status. With Bum ban ban ban, a version of British singer Lulu’s Eurovision winner, Boom bang-a-bang, on the B-side, the single was high camp.

Sadly, it proved Kinita’s last. Like the yo-yo itself, she went out of fashion, and slipped quietly back into the obscurity from whence she came. Attempts to find the singer have failed and she remains a mystery.