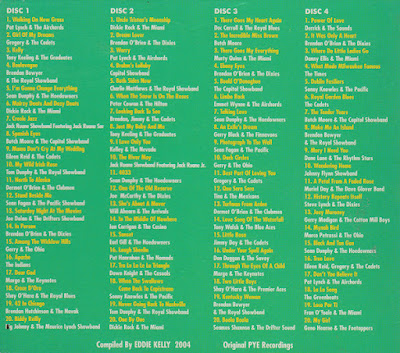 The Irish showband is a dance band format which was popular in Ireland mid-1950s to the mid-1980s, though some showbands have survived until the present day.[when?] The showband was based on the internationally popular six- or seven-piece dance band. The band's basic repertoire included standard dance numbers and covers of pop music hits. The versatile music ranged from rock and roll and country and western songs to traditional dixieland jazz and even Irish Céilí dance, Newfie stomps, folk music and waltzes. Key to a showband's popular success was the ability to perform songs currently in the record charts. Some bands also did comedy skits onstage.

The lineup usually featured a rhythm section of drums, lead, rhythm and bass guitars, a keyboard instrument, and a brass section of trumpet, saxophone and trombone. The band was fronted by one or two lead singers, who were assisted by other band members on backing vocals. Comedy routines were sometimes featured. The Irish showband, unlike the big band, played standing,[1] and members would often step, dip and bop in the manner of Bill Haley & His Comets or a black soul band, which brought more energy to the performance. Initially, the bands' tours were limited to Irish venues. As the scene progressed, the more successful bands toured Irish clubs located in Britain the United States and Canada. Some later rock- and soul-oriented Showbands toured German nightclub circuits and a myriad of US Army base clubs in Europe.