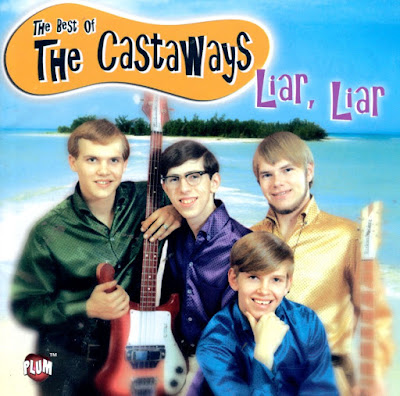 Best remembered for their garage-rock perennial "Liar Liar," the Castaways formed in 1962 around the nucleus of guitarist Roy Hensley, bassist Dick Roby and drummer Denny Craswell; originally founded simply to perform at a fraternity party, the group proved such a smashing success that it remained an ongoing concern, expanding to a quintet with the subsequent additions of lead guitarist Bob Folschow and keyboardist Jim Donna. The Castaways' lone hit, "Liar Liar" was written by Donna and released on the Soma label in 1965, reaching the number 12 slot on the U.S. charts on the strength of its inimitable echo-drenched vocals and wheezing keyboards. A series of follow-up efforts flopped, however, and despite an appearance in the 1967 film It's a Bikini World, the Castaways' career ground to a halt, although the band often performed live in the decades to follow.

The Castaways are a rock and roll band based in Minnesota that have been playing concerts, parties and weddings for years. Jim Donna (keyboards and vocals) is one of the original members of the band. It was his composition, Liar Liar that not only became a million selling song and landed in the top 10, but a song Robert credits as being influential to the sound of his then group, the Band of Joy.

Bob Donna later joined the band on guitar and vocals with Rick Snider on drums and vocals, and Ralph Hintz on bass and vocals. In 2005 Jim Donna was inducted into the Minnesota Rock/Country Hall of Fame.

Their music has a high energy lively dance beat blended with the soul sounds of The Righteous Brothers. Their song selection runs the gamut of pop and classic rock, ballads to 50s and 60s favorites. 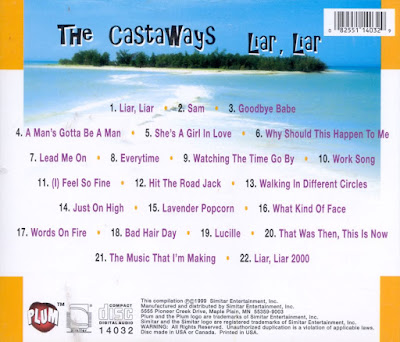 One of the great one-hit wonders of the mid-'60s, the Castaways  with a catchy, garage sound best exemplified by their lone national hit, "Liar Liar." This 22-track anthology takes listeners through the band's entire history, right up to the present time, including a "Liar Liar 2000" remake. Along the way, the band goes through the customary stylistic changes (from garage to Beatles cops to soul to psychedelia) in search of that elusive second hit that most bands go through, trying new styles to fit the changing times until coming full circle back to their original sound. Great notes on the band's history and the new cuts brings a nice sense of closure to the package.

tags The Castaways, US