The Poets - Scotland's No. 1 Group 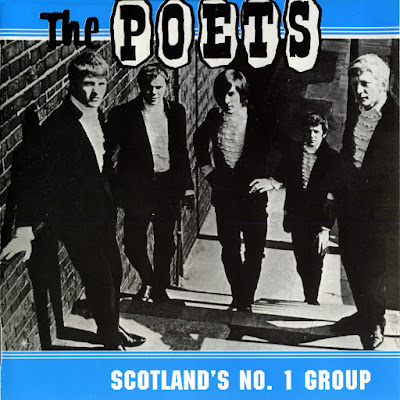 The Poets were one of Scotland’s top live attractions during 1963-1968. The Glasgow-based group, celebrated for their originality early on, were soon sharing the same manager and producer as The Rolling Stones, Andrew ‘Loog’ Oldham. It was Oldham who signed them up, and would help them to realise their potential on some fabulous singles the group made for Decca, then Immediate, between 1964-67. Their first effort, ‘Now We’re Thru’, gained them a top thirty placing in the national charts helped along by television exposure thru the likes of Top Of The Pops and Ready Steady Go. Early in 1965 they followed-up with the truly mesmerising ‘That’s The Way It’s Got To Be’, now rightly regarded as a pioneering and stunning example of what is known to fans and collectors world-wide as the ‘freak beat’ sound. Though the original group splintered throughout ’65 and ’66 the name of The Poets was valiantly carried forward until the dawn of the new decade.

The Poets never attempted any reunions throughout the ensuing years and now from the late 1990s the passage of time has begun to claim the lives of some of the group’s original members. First bassist John Dawson died, then drummer Alan Weir, and most recently 12-string lead guitarist Hume Paton. However, throughout 2010-2011 original singer George Gallacher and 1965-67 guitarist Fraser Watson teamed up with Edinburgh beat-garage stalwarts The Thanes, friends and resolute Poets fans, to see if some of the melancholy beat magic captured on The Poets’ vintage records could still be felt today. Rehearsals and a couple of short, low-key appearances in Edinburgh and Glasgow proved positive and have given way to this new line-up of The Poets who are revisiting much of the repertoire that so captivated many audiences throughout Britain more than forty five years ago.

Also, for the first time ever in UK a new official CD collection ‘Wooden Spoon – The Poets Singles Anthology 1964-1967 has been recently issued by the Grapefruit label, via Cherry Red and has been garnering favourable radio plays and media reviews. Full line up of The Poets is: George Gallacher – vocals, Fraser Watson – guitar / vocals, Angus McPake – 12-string lead guitar, Mike Goodwin – drums / percussion, Mark Hunter – bass, and Lenny Helsing – guitar / vocals. As part of Eyes Wide Open club’s seventh anniversary celebrations The Poets played a sold out gig at Glasgow’s Stereo venue on Friday December 2nd, receiving a rapturous reception from all who attended. This occasion marked the group’s first live date since the heady days of the 1960s. As a special taster BBC Radio Scotland’s Vic Galloway had the group in for a spectacular live session on his November 21st show. The group were also featured in a two-page article published in The Scottish Daily Mail 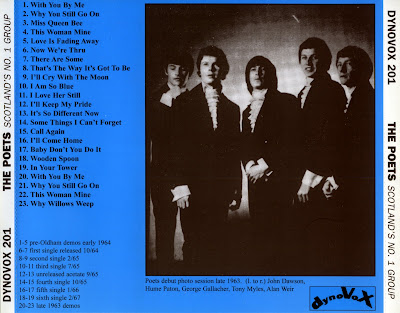