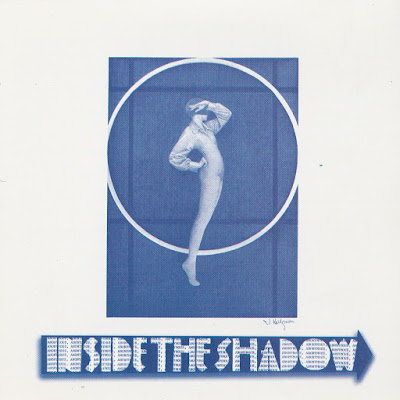 Biography by Stewart Mason
A somewhat mysterious but eminently worthwhile quartet from Indianapolis, IN, Anonymous was active in the mid- to late '70s but sounded like they came from a decade earlier. The group's acknowledged antecedents were the Beatles and the Byrds, but from such familiar trappings, Anonymous created a richly textured version of classic psychedelia that both adheres to and ignores the common precepts of the genre. The mellow, wide-ranging but never aimless results sound like a cross between a far more structured version of Quicksilver Messenger Service and an American equivalent of the fluid, jazz-tinged progressive rock of Curved Air.

Anonymous' roots were in the '60s garage scene. Singer/guitarist Ron Matelic and drummer Jon Medvescek had played in the Indianapolis psych-poppers Sir Winston and the Commons (whose two singles were reissued on a vinyl EP by Sundazed in 1999) in the mid-'60s. Matelic and Medvescek continued playing together after that band broke up, eventually adding Marsha Rollings on vocals and Glenn Weaver on bass and second guitar. At first, the quartet simply jammed at their homes on Sunday afternoons, but when Matelic was offered a recording contract by the archly named Milwaukee indie A Major Label in 1976, he drafted his friends into rehearsals, eventually recording the album Inside the Shadow under the randomly chosen name Anonymous over the course of two weekends.

Anonymous was originally considered simply a studio project by its principals, but some months after the release of Inside the Shadow, Matelic and Medvescek decided to begin rehearsals for live dates. Justin Garriot joined the band as a second guitarist at this point, and Greg Reynolds replaced Weaver on bass. Although the group initially continued under the name Anonymous, when Garriot and Rollings left the band, the remaining trio changed their name to J. Rider after a song on Inside the Shadow.

J. Rider played live around the Indianapolis area for a couple of years before going into the studio for what Matelic initially considered a demo session to possibly spur major-label attention. The results were eventually released by the same label who had put out Inside the Shadow under the title No Longer Anonymous.

Although J. Rider split after the 1979 release of No Longer Anonymous, the two albums' popularity slowly grew by word of mouth in the worldwide psychedelic underground. A Major Label reissued Inside the Shadow in 1981 as a self-titled record with a garishly colored sleeve drawing of an underwear-clad woman on a striped couch, apparently to make it look like a new wave album. Both Inside the Shadow and No Longer Anonymous were bootlegged several times before the Indianapolis reissue label Aether Records released both albums on a single CD, with liner notes by Matelic, in 2001.

Although these albums were made by an all-but-unknown Indianapolis band in the latter half of the 1970s, Inside the Shadow and No Longer Anonymous are prime '60s-style psychedelia that stands up to many of the genre's better-known releases. The songs on 1976's Inside the Shadow, built around Marsha Rollings' lovely voice and Ron Matelic's heavily Byrds-influenced guitar (the ultra-jangly "Pick Up and Run" could be an outtake from 5D), are an impressive lot, with a stronger sense of melody and structure than the aimless jamming that typifies so many psychedelic albums. Matelic's songs are determinedly on the poppy end of psychedelia, with catchy choruses, soaring harmonies, and plenty of hooky instrumental riffs to keep the listener's attention. Even the nine-minute "Baby Come Risin'," with its extended jam middle section, sounds more composed than one would expect. No Longer Anonymous was recorded in 1979 by a revised lineup of the band -- Rollings, unfortunately, is gone, and the new version of Inside the Shadow's high point "We Got More" shows how much she's missed -- and originally released under the name J. Rider. Matelic's liner notes claim that this album was originally intended as a demo tape of the group's most commercial songs. Indeed, this is a more determinedly rock-oriented affair; the opening "One-Sided Lover" sounds worryingly like an early track by fellow Hoosiers REO Speedwagon, although it also features some exceptional three-part harmonies. But for all that, No Longer Anonymous still has a handful of excellent songs well served by the more aggressive and electric sound. The vinyl transfer is not the best it could be -- the dreamy acoustic opening of "Shadow Lay" is marred by surface noise and pops that are nearly as loud as the music -- and for some unknown reason the second version of "We Got More" appears twice in the album's running order, but despite the reissue's flaws, this CD is the best (not to mention least expensive) way to hear these two largely unknown but eminently worthwhile albums. ~ Stewart Mason, All Music Guide 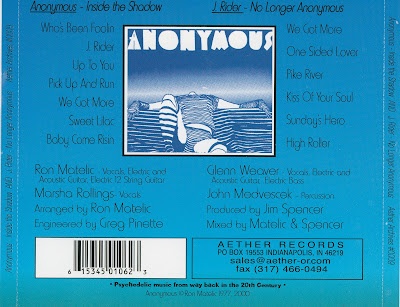