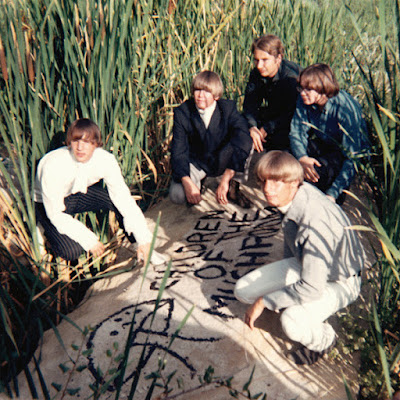 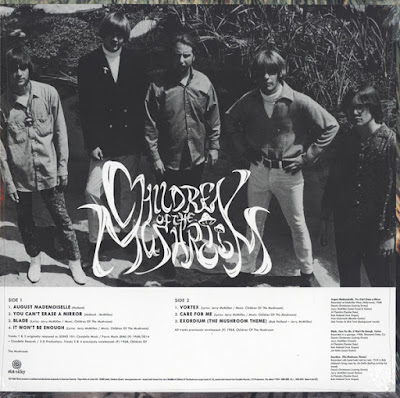 Children Of The Mushroom formed in Thousand Oaks, California, which is a small town near Los Angeles. First they were called The Captives and around the summer of love they became Children Of The Mushroom.
The band consisted of Jerry McMillen (guitar, vocals, flute), Bob Holland (organ), Al Pisciotta (bass), Dennis Christensen (drums) and Paul Gabrinetti (guitar, vocals). The band was inspired by The Doors, Iron Butterfly and similar groups, which appeared around the L.A area. In 1968 the Soho label out of Hollywood released their incredible single.
Children of the Mushroom were a psychedelic rock band that formed in the latter half of the 1960s in the Los Angeles area. It’s likely no coincidence that their sound bears a striking resemblance to their L.A.-based psychedelic contemporaries, the Doors and Iron Butterfly. Unlike their more famous brethren, though, Children of the Mushroom never really made it outside of Los Angeles. Instead, the band only managed to record one official single, “August Mademoiselle / You Can’t Erase a Mirror”, which, besides becoming a valuable rarity for record collectors, failed to make an impact. The band’s other incarnations, first as the Captives, and later as simply the Mushroom and finally, Lady, never got out of the local gig stage, either.

Nevertheless, Out-sider Records is rereleasing the band’s single and adding five more songs unearthed from home recordings to give Children of the Mushroom the proper album they never got to make themselves. That album is listenable without being anything revelatory. It’s pretty difficult to imagine anyone discovering a long-lost late ‘60s American rock band at this point, nearly 50 years later; that’s really amazing. Even the era’s vastly underappreciated acts (NRBQ comes to mind) have their supporters out there.

The single, while thinly produced, is quite a good pairing. “August Mademoiselle” features a driving drumbeat and ever-present Vox organ and Jerry McMillen’s dramatic Jim Morrison-style crooning. The fuzzed-out guitar solo, during a very deliberate mid-song slowdown, is a strong one. The B-side showcases a different side of the band, with a slow 6/8 beat and prominent space for the bassline. And organ. So. Much. Organ. The combination of clean rhythm guitar and fuzz lead guitar is very effective, though. And both songs, combined, are over in a brisk five and a half minutes.

Once we move on to the home recordings, though, made a year or so later, the looser side of the band comes out. “Blade” hits harder, with pounding drums, an organ tone that’s closer to an ominous pipe organ, and a refrain that says, “I’m thinking seriously about ending your life.” It also contains an organ solo that pushes the song past the six-minute mark, bringing the Iron Butterfly comparisons to the fore. The album finishes with the seven-minute instrumental jam “Exordium (The Mushroom Theme)”, which starts plodding and slow before drummer Dennis Christensen Swanson’s cowbell beat kicks off the jam. Because the band pushes the tempo and Swanson’s beat is compelling enough to hold the whole thing together, listening to Bob Holland’s organ meanderings is not a bad way to spend five minutes.

The remaining songs on Children of the Mushroom are passable, but not particularly impressive. “It Won’t Be Enough” sounds like a blatant Doors impersonation, which is unfortunate. “Vortex” is a decent attempt at a dark tale of lost love, but its slow tempo lacks a compelling melody despite vocals that try really, really hard. This is an instance where the organ does nothing to help the song. Instead the latter half of the track is rescued by a surprisingly heavy and effective guitar solo. “Care for Me” finds the rhythm section locked into a strong groove, and despite a relatively blah chorus, the weird musical digression in the song’s back half makes for interesting listening.

Children of the Mushroom is the kind of album that doesn't have much to offer outside of hardcore fans of psychedelic rock. There’s nothing on the album that’s particularly challenging to listen to, it’s just not good enough to really stand out from other music of its era. It’s an interesting relic but it’s not a hidden gem. Dennis Christensen Swanson was a creative drummer and Bob Holland, who was only 15-16 when these recordings were made, was a heck of an organ player. But the band wasn’t writing great material to support their best musicians, so the end result is pretty middling.

With only a single released in 1968, Children Of The Mushroom nobody personified as the Californian psychedelic sound of the late 60s Jerry McMillen and Dennis Swanson formed The Captives, beat teen- group, in the mid-60 in Thousand Oaks, California . In 1967, they changed its name to Children Of The Mushroom, and fully influenced by the psychedelic stream. The following year they are signed to a duet of producers offering them recording a single for the label Soho Records. The result was two stunning psychedelic garage issues "August Mademoiselle" and "You can not erase a mirror", full of vocal harmonies, fuzz, feedback, organ and mysterious atmosphere.

tags 60's, Children of The Mushroom