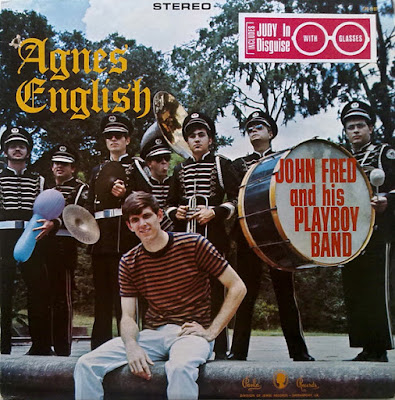 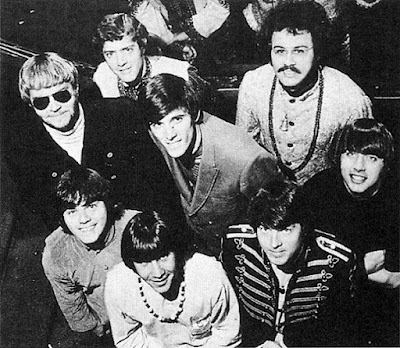 John Fred strode into the studios of KALB radio in Alexandria in the summer of 1966 bearing a copy of his brand new single release: "Sun City". You really had to be into Swamp Rock, which I was, to appreciate that song, which I did.  I played it so often, it sounded like the hiss of a steam engine in the background.  After hearing that, John stopped by to thank me, and shoved a half dozen copies into my hand. "Please don't stop playing it until these wear out," he laughed.  "Then call me and I'll bring some more."  Well, it never made many charts, but it was and always will be my favorite John Fred song.

"Judy In Disguise"  was his only National Chart hit. It was written by the Louisiana native who was born John Fred Gourrier. John was allready a well known Louisiana artist when he heard The Beatles "Lucy In The Sky With Diamonds".  John liked the ring of "disguise" over "the sky" and  felt the Beatles had missed the opportunity to do a sequel, so he did it for them.  Hence, Judy In Disguise was born, with some perfectly nonsensical lyrics, including the famous line from a Playtex living bra commercial.i.e.,  "Cross your heart, with your living bra"  The band didn't want to do such a teeny bopper song and they hated the ending ("I guess I'll just take your glasses")

Sadly, John Fred passed away on April 15, 2005.  Following are some facts I managed to harvest from the internet:

Born John Fred Gourrier in Baton Rouge May 8, 1941; he was married and had one son; John died in New Orleans University Hospital on April 15, 2005 of a kidney ailment.

His father was a professional baseball player, but Gourrier needed little encouragement to play sport at Catholic High School. Growing to six foot five, he became increasingly skilled at basketball and he was awarded an athletic scholarship to a university in Louisiana.

Gourrier became interested in black rhythm and blues after hearing Fats Domino's "Goin' to the River". In 1956 he formed a band with his school chum and at first they called themselves the Redcaps. Later they changed it to The Playboys, inspired by a copy of Playboy magazine one of the group members brought to a practice session.

In 1958 Sam Montalbano, who promoted dances in Baton Rouge, was so impressed that took them into the legendary Cosimo's studio in New Orleans for a session. The band followed Fats Domino, who was recording "Whole Lotta Lovin' ", and some of Fat's band members helped out on John's original "Shirley". The record became a regional hit but Montalbano had poor distribution and put a photograph of the band in a trade paper. When the disc-jockeys realized the band was not black but white, they stopped playing the record. John returned to his studies.

Around 1964 he established a new group, John Fred and the Playboy Band. Their version of "Boogie Children" combined John Lee Hooker's "Boogie Chillen" with Frankie Lee Sims's "Walkin' with Frankie" and was a regional success, as was "Up and Down" and "Agnes English". The international breakthrough came with "Judy in Disguise (With Glasses)". The title was inspired by seeing girls in Fort Lauderdale sporting large sunglasses which disguised their features. As well as the obvious nod to the Beatles (for example, "lemonade pies" for "marshmallow skies"), the up-tempo dance number owed something to the bass line from "Rescue Me" by Fontella Bass. The record topped the US charts, ironically replacing the Beatles' "Hello Goodbye".

To date, the song has sold more than 5 million copies. After its success, John Fred decided to leave Paula Records and joined the likes of Elton John and Neil Diamond on the roster of Los Angeles-based Uni Records.

In 1969 Gourrier was introduced to Elvis Presley, who praised "Boogie Children". The Playboy Band made three albums but had no further hit singles, although, in 1982, "Shirley" was recorded by Shakin' Stevens and went into the UK Top Ten.

In 1979, John Fred began producing records for other artists, including Irma Thomas' critically acclaimed comeback album, Safe With Me. He has also written, performed and produced jingles for such advertisers as Greyhound Bus Lines, Decker Hot Dogs and Ban Deodorant as well as the song "Baseball at the Box" for Louisiana State University's baseball team. He also coached basketball. 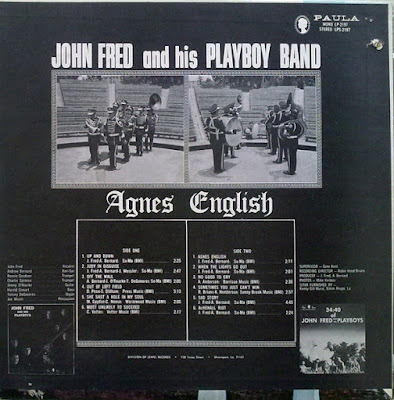