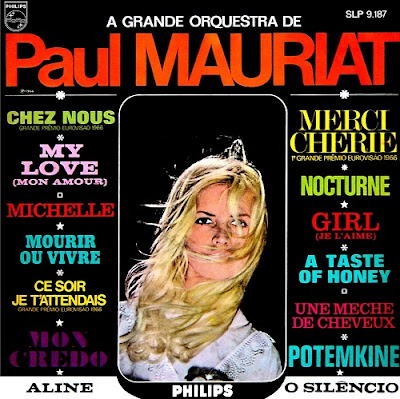 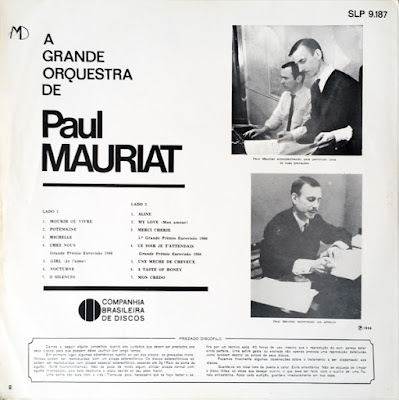 Paul Julien André Mauriat (French: [pɔl mɔʁja] or [moʁja]; 4 March 1925 – 3 November 2006) was a French orchestra leader, conductor of Le Grand Orchestre de Paul Mauriat, who specialized in the easy listening genre. He is best known in the United States for his million-selling remake of André Popp's "Love is Blue", which was #1 for 5 weeks in 1968. Other recordings for which he is known include "El Bimbo", "Toccata", "Love in Every Room/Même si tu revenais", and "Penelope".

Relative to his peers, Paul Mauriat has one of the largest recording catalogs, featuring more than 1,000 titles just from his Polygram era (1965–1993). He was awarded the Grand Prix (Grand Prize) from the French recording industry, a MIDEM trophy, and in 1997 won the prestigious distinction of Commandeur des Arts et des Lettres from the French Ministry of Culture. He sold over 40 million albums worldwide and held 28 tours in Japan from 1969 to 1998.

In the early to mid-1980s, Paul Mauriat appeared in several Japanese coffee and wine television commercials, which featured music from his orchestra.

A line of saxophones and trumpets are named for Paul Mauriat, under the brand P. Mauriat, reflecting his popularity in their country of origin, Taiwan.

Both Mauriat's single recording "Love is Blue" (1967) and the album Blooming Hits each sold over one million copies. The single was awarded a gold disc by the Recording Industry Association of America in March 1968

On 3 November 2006, Paul Mauriat died in Perpignan, France, at the age of 81. After his death, The Paul Mauriat Grand Orchestra also ceased to exist.

Mauriat is buried at the Perpignan South Cemetery in Columbarium