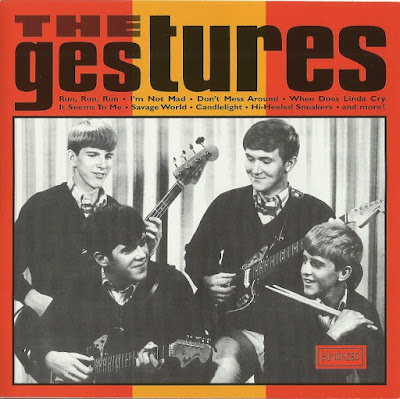 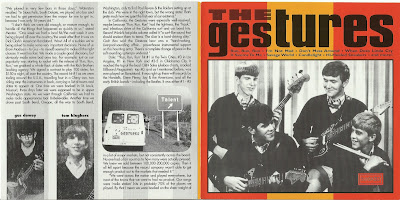 One of the first American garage bands to write and perform British Invasion-derived material, the Gestures only recorded two singles in the mid-'60s. But one of those, "Run, Run, Run," was an excellent effort indeed, with its blend of surf-styled guitar, terrific pummeling drums, and Beatlesque harmonies. It made #44 nationally in late 1964, and made the Top Ten in several cities, but the Minnesota group only made one follow-up before disbanding. Recording for a tiny regional label, there wasn't enough of a support network to build the Gestures into a bigger act, although some strong original songs — which employed pleasing harmonies and unusual, almost jazzy chord structures — indicated that the group had considerable potential. As it was, they're just another in a line of young groups whose prospects were short-circuited by limited opportunities, although "Run, Run, Run" is now acknowledged as one of the earliest and best garage 45s, especially after it was reissued on Pebbles, Vol. 9. 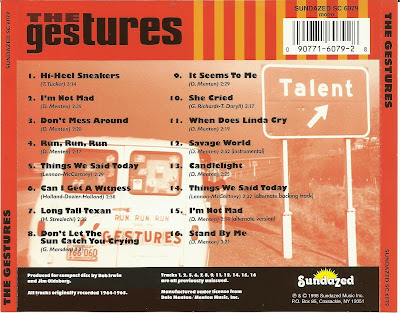 The Gestures never released an album during their brief existence. This 16-track disc was patched together by combining all four songs from their two singles with 12 previously unreleased cuts that were recorded for a projected (but unreleased album). "Run, Run, Run" is a stone classic, from its opening rush of ascending chords to its final chorus. Gestures songwriter Dale Menten penned a couple of other neat, more subdued tunes that bridged surf-frat rock with British Invasion styles. Most of the unreleased stuff, though, is competent, but not overly stunning, covers of mid-'60s hits from both the U.K. and the U.S. As such, it's more a testament to what might have been than a notable document, although garageheads will find it entertaining.