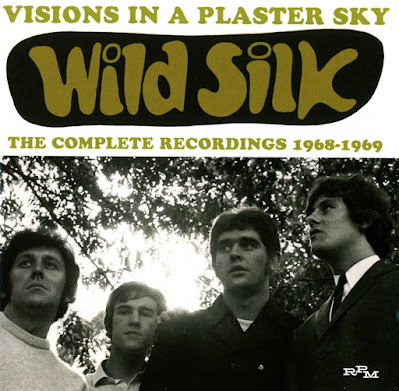 British psychedelic pop group, late 1960s. Also known as Basil*.
Lineup:
Allan Davies - lead vocals
Danny Maidment - guitar, vocals
Barry Beasley - bass, vocals
Bill Slaney - drums
Jim Turner - keyboards, vocals (joined in summer 1969)
* Name for US releases for european Wild Silk releases
Wild Silk were one of those 60s outfits that were unfortunately not allowed to play on their own records, with hardened sessioners like Big Jim Sullivan and Clem Cattini being summoned into lay down the music, while the band itself kicked their heels. They were required for their voices though, because the band had enviable smarts in the field of harmony singing. From the outside view it would seem that they were mere pawns in the hands of producer Shel Talmy, who was coming off the back of huge success with the early recordings of the Kinks, the Who and the Creation. More recently he had helmed a massive hit with the Easybeats, Friday On My Mind, so his stock was high.
School friends William Slaney and Barry Beasley first mooted the idea of the band in the early 60s, with the usual influences of the Beatles and the Shadows being their original inspiration. They went through a number of line-ups and a long running incarnation as the Vivas with guitarist Danny Maidment coming in. A revolving door policy of vocalists was finally arrested when they found singer Allan Davies and the group was complete. Mick Abrahams, a friend of the band, introduced the quartet to Talmy when they were working under the name Tramline. Cutting the single Poor Man (well singing with all the musical work being done by session men and overseen by arranger Keith Mansfield who had recently done the same for Love Affair) under that moniker, the band name had changed to Wild Silk by the time of its release.
~ https://louderthanwar.com/wild-silk-visions-in-a-plaster-sky-album-review/ 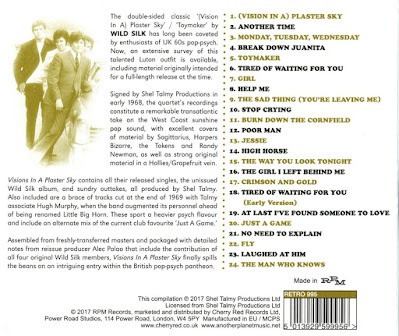