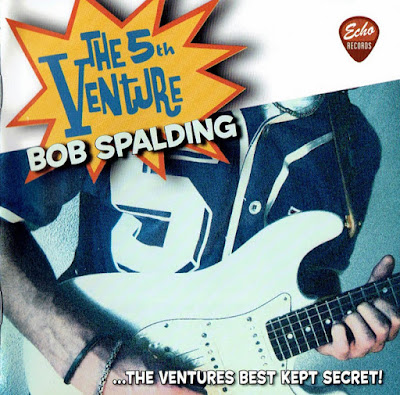 Robert Eugene Spalding (born February 10, 1947) is an American musician, composer, arranger, and producer. He is best known for his work with Rock and Roll Hall of Fame group  the Ventures and he has appeared on over 40 Ventures albums from 1980 through to the present. Spalding continues to tour, record, as well as produce with the Ventures as well as other artists.
Early career
Spalding saw the Ventures, Bob Bogle and Don Wilson, on stage on their first visit to Japan in 1962 and he was very impressed with their performance. This inspired him further in learning to play the guitar, while never imagining that he would, in the future, become a member of the Ventures and he would return to Japan many times on tour with them. His father had been posted to Japan with the Military and the Spalding family lived there for three years. After the family returned to the USA later in 1962, Spalding played in his first band, the Nomads, all through High School in Austin, Texas. The Nomads were his first experience with recording and producing. The band, featuring his older brother Perry Spalding on drums, recorded several unreleased singles and one album. However, before the group could capitalise on their full commercial potential, Spalding was drafted into the army where he served one tour of duty in Vietnam. Emerging as a decorated combat war veteran, he enrolled in college where he received a major in Business and a minor in Marketing. After graduating from college in San Bernardino, he continued to play with various California bands and to submit his original compositions to music publishing companies in Los Angeles.
Sweet Pain
In 1970, Spalding had an opportunity to join a group that was poised to sign a recording contract with Liberty Records. The group, Sweet Pain, completed their first album after Spalding joined the group and they toured the USA as an opening act for many established artists. When the group was in Southern California they played regularly at the famous Golden Bear in Huntington Beach where they often opened for established acts like Linda Ronstadt, War, and the Nitty Gritty Dirt Band, and where Spalding once had the experience of playing in the backup band for Chuck Berry. Sweet Pain recorded two additional singles as well as a second unreleased album before the band left United Artists Records. However, prior to them leaving, the group used the pseudonym Dolphin Market to record an instrumental entitled Diego.
Mel Taylor and the Dynamics
While working at United Artists, Bob had the opportunity to meet the Ventures and to attend some of their recording and rehearsal sessions. He became friends with Mel Taylor, drummer for the group, which would soon prove fortunate for Bob, as he had recently been released from a record company contract at United Artists and he was looking for another opportunity. Bob was then invited to join Mel Taylor, who had left the Ventures to pursue a solo career as Mel Taylor and the Dynamics, [2] with Bob playing rhythm guitar. The group toured Japan in 1973 and they recorded two albums with Bob playing both electric and acoustic guitars. By 1980, Mel Taylor had rejoined the Ventures and Bob Spalding was regularly asked to play additional guitar on recording sessions for the Ventures.
The Ventures and beyond
Spalding's extensive recording studio work for the Ventures since 1980 resulted in him often being referred to as The 5th Venture. He also deputised regularly on guitar or bass guitar for the Ventures on live concerts until 2005 when he joined the band permanently when Bob Bogle retired from touring. On March 10th 2008 the Ventures were inducted into the Rock and Roll Hall of Fame at a ceremony held at the Waldorf-Astoria Hotel in New York. Bob Bogle was unable to attend, so Spalding accepted the award on his behalf and he performed with the Ventures live on stage at the event. Spalding had initially taken over from Bob Bogle in 2005 playing bass guitar for recording purposes and for their annual tour of Japan, but following the retirement of Gerry McGee in 2017, Spalding took over from him as lead guitarist of the Ventures with Leon Taylor (drums), Ian Spalding (rhythm guitar), and Luke Griffin (bass guitar) completing the band
https://en.wikipedia.org/wiki/Bob_Spalding_(musician) 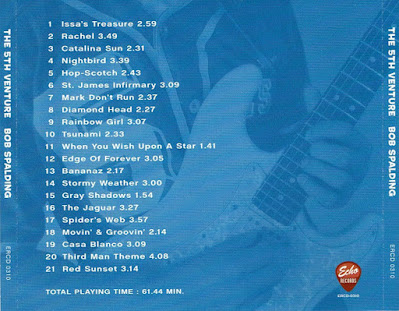