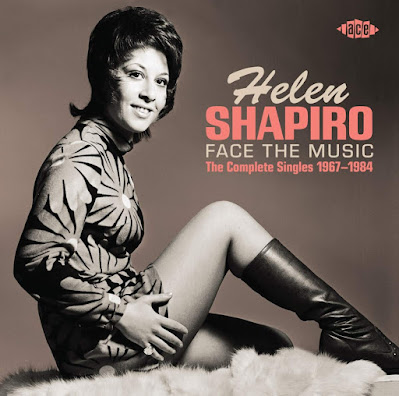 Helen Shapiro "Face The Music: The Complete Singles 1967-1984" will be released on 28th August 2000
The later and rarer singles of Britain’s first 60s female pop icon. Many appear on CD for the first time.
Almost 60 years have passed since Helen Shapiro burst onto the UK Pop scene with ‘Don’t Treat Me Like A Child’ – a Top 3 hit followed by the consecutive #1s ‘You Don’t Know’ and ‘Walkin’ Back To Happiness’, and a #2 with ‘Tell Me What He Said’ – all before she had turned 16. In the years before the Beatles, who once supported her on tour, Helen was a permanent presence on our charts, and continues to be a fan favourite almost 20 years after she announced her retirement.
Helen’s early hits can be found on CD, but in “Face The Music” Ace brings you the first-ever compilation to pull together the complete A and B-sides of every single she released between 1967 and 1984, with repertoire drawn from five different labels. All tracks appear here in their original mono and stereo mixes, just as they were released on 45. Around a third of the titles have never been reissued before, in any format. With a booklet stuffed with the usual plethora of ephemera, labels and rare picture sleeves, it’s something no fan will want to miss. A sleeve note featuring a specially conducted interview provides Helen’s thoughts on these recordings and this period in her career.
The collection comes to you with the full approval and endorsement of Helen and John, her husband of more than 30 years. Of her career, Helen says “I’ve been very fortunate, very blessed”. Her many fans all over the world would surely echo those sentiments while welcoming this essential addition to their collection of this never less than great artist. 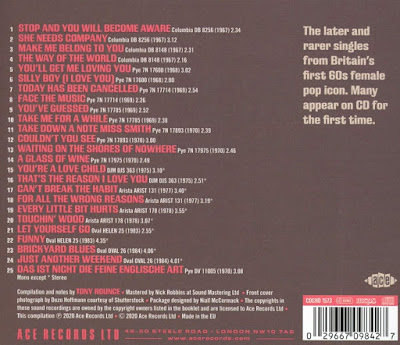