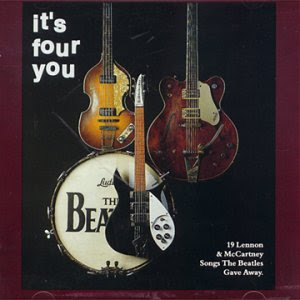 Update to Flac
The Beatnix concept was conceived and assembled in March 1980 by founding member Tony Dean, rhythym guitar/vocals, [now retired to full-time management] as a live performance entity. This puts it amongst the longest running Beatles Tribute Shows in the world. It is certainly the most imitated Beatles Show down under and we are truly flattered.

The Beatnix show includes fully authentic musical instruments similar to those used by The Beatles. These include very rare and valuable guitars by Gretsch, Hofner, Rickenbacker and Gibson, Vox AC30 guitar amplifiers and a Vox AC50 bass amplifier with a T60 bass cabinet.

The drums are identical to the ones used by Ringo, a 1960's model Ludwig Black Oyster Pearl kit complete with Zildjian cymbals, The Beatnix have the real vintage equipment.

This combined with a range of early period Beatle costumes and the colourful Sgt Pepper's Lonely Hearts Club Band outfits give you the complete Beatles experience. You will believe you are seeing the real Beatles.

The Beatnix Show has performed extensively overseas including several seasons in Hong Kong, Malaysia, Bangkok, New Zealand and we have even performed for Royalty in Brunei.
Domestically they have done them all from large venues ie. ARL Grand Final at the Sydney Olympic Stadium [with over 100,000 people] Darling Harbour [with The Merseyside Orchestra] Sydneys' Taronga Zoo Twilight Concert Series, The Melbourne Zoo, Vodaphone Stadium, Sydney Opera House, The Gove Peninsular Festival, Alice Springs Race week, Gold Coast Wintersun Festival to smaller more intimate venues ie. The Basement, numerous weddings and birthday parties including shows on Sydney Harbour cruise boats and even a party for 50 people in a back garden setting in Surry Hills.

There have also been many television performances including Hey Hey Its' Saturday, The Midday Show, Good Morning Australia, The Don Lane Show, Ernie and Denise, Simon Townsends' Wonderworld, Donnie Sutherlands' Sounds, and appearances at Beatle Festivals in Adelaide, Melbourne, Auckland and four Beatlefests in Sydney.

The Beatnix have also been professionally recorded on the noteable "It's for you" lost Beatles tracks album, "Stairways to Heaven" with the "Money or the Gun" album and numerous T.V. and radio commercials including The Soothers ad, Arnetts Shapes, Browns Choc and you may have seen the "Hertz" ad with the guys [complete with bass drum] in the print media.
http://www.beatnix.com.au/ 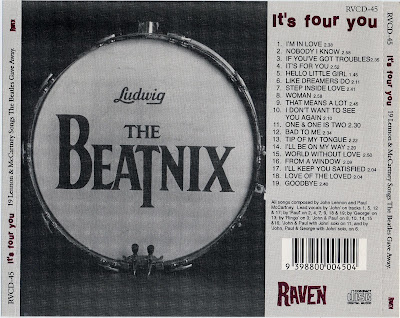 01 - I'm In Love
02 - Nobody I Know
03 - If You've Got Troubles
04 - I'ts For You
05 - Hello Little Girl
06 - Like Dreamer Do
07 - Step Inside Love
08 - Woman
09 - That Means A Lot
10 - I Don't Want To See You Again
11 - One & One Is Two
12 - Bad To Me
13 - Tip Of My Tongue
14 - I'll Be On My Way
15 - World Without Love
16 - From A Window
17 - I'll Keep You Satisfied
18 - Love Of The Loved
19 - Goodbye
The Beatnix' It's Four You is the work of painstaking archivists who gathered all 19 Lennon/McCartney compositions that were given to other artists (like P.J. Proby, Cilla Black, Billy J. Kramer & the Dakotas, Peter & Gordon, etc.) and never recorded for Beatles albums. The Beatnix perform these songs faithfully, in a strongly Beatlesque style that crosses the line from influence into imitation. But that's the point of the album — giving power-pop fans a chance to hear what these songs probably would have sounded like had the Beatles kept them — and in that sense, it accomplishes exactly what it set out to do.

The Liverpool Echo
“Power pop has never sounded so powerful! When former Mandrake Paddlesteamer mainstays Brian Engel and Martin Briley convened as Liverpool Echo in 1973, the Beatles had been in the grave for just three years, and the world still desperately wanted them back -- so desperately that, with a band name borrowed bodily from an old Merseybeat-era newspaper, what could any record company do, but lift a "Fabs"-headlined copy of the paper for an album cover? But "Beatles Come Home So Quietly" really wasn't the most appropriate banner for an LP jacket, all the more so since, once you hit the vinyl, the spirit of the "Moptops" hung so heavily over the music that it screamed out for attention. Of course, it was true that any early-'70s band that was capable of melding melody with studio-borne creativity would inevitably be tarred "the new Beatles" (as Badfinger and 10cc would readily testify); it is also true that all such comparisons were then hopelessly devalued by the arrival of the Rutles. But still Liverpool Echo have an uncanny grasp of the Merseybeat sound circa 1963 and 64, spliced with a healthy hint of the Hollies, and that was more than enough to raise high hopes for the album.
****
22 - You Know It Feels Right
23 - No Not Again
24 - Girl On The Train
25 - Sally Works Nights
26 - No More Tomorrows