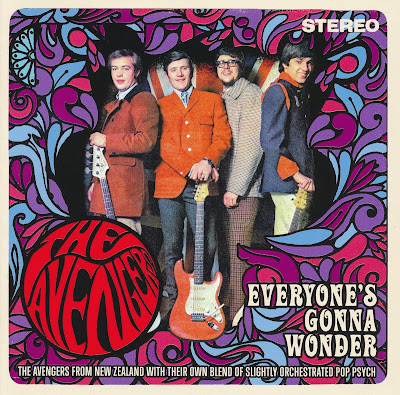 THE AVENGERS
1966-1970
Original line-up was:
CLIVE COCKBURN – lead guitar/organ/vocals
DAVE BROWN – rhythm guitar/vocals
EDDIE MCDONALD – bass guitar/vocals
IAN (HANK) DAVIS – drums/vocals
http://www.audioculture.co.nz/people/the-avengers
One of the more successful New Zealand pop bands of the late 1960s, the Avengers were formed in Wellington in mid-1966. (Confusingly, another group with the same name -- a backing unit for singer Ray Woolf -- emerged in Auckland at much the same time.) The Avengers were formed at the behest of promoter Ken Cooper, who was seeking a house band for his nightclub the Place; he first approached guitarist Dave Brown, who in turn recruited guitarist Clive Cockburn, bassist Eddie McDonald and drummer Hank Davis. With their name decided as a result of a local newspaper contest, the quartet amassed a repertoire of some 75 Beatles songs in addition to covers of hits by Herman's Hermits and the Hollies; within a year, they were easily Wellington's most popular group, and in mid-1967 issued their debut single, the Top Ten hit "Everyone's Gonna Wonder." A series of smashes followed, including "Only Once in My Life," "1941," "Love Hate Revenge" and "Days of Pearly Spencer." However, the Avengers' success remained confined to New Zealand's shores, with all attempts to crack the lucrative Australian market proving futile; they disbanded in mid-1969, leaving a legacy which included the LP The Avengers Live at Ali Baba's (the first live album in the annals of Kiwi rock). 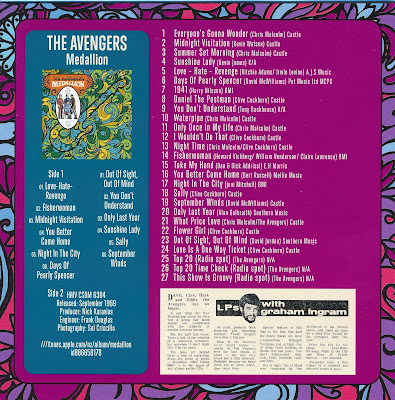