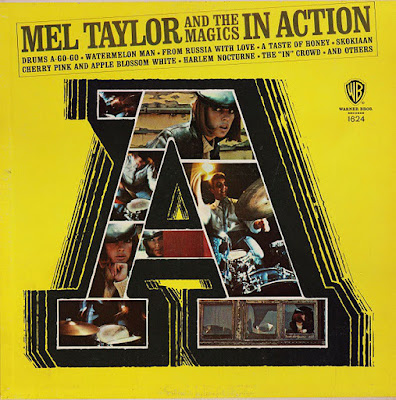 American drummer, born september 24, 1933, died August 11, 1996.
He joined The Ventures in 1962, left the band in 1972, then returned in 1979 and stayed with them until his death from cancer in 1996.
He was the older brother of Canned Heat bassist Larry Taylor.
After drumming with Boris Pickett and Herb Alpert, Taylor joined the Ventures in 1962 to fill in for Howie Johnson, who had been severely injured in an automobile accident. Johnson played with a neck brace for a period, but didn't want to be away from his family (in Washington state) for long periods, so he opted to be replaced. Taylor's distinct, harder-edged rock style so impressed the members of the band that they asked him to become a permanent member of the group.
Taylor released a solo album in 1965 ("Mel Taylor & The Magics In Action"). In 1972, he decided to leave the Ventures to pursue a solo career, forming the band Mel Taylor & the Dynamics. During this time, they released four albums: "007 James Bond", "Sand, Sea and Love", "Mel Taylor in Japan", and "Roll over Beethoven". Taylor rejoined the Ventures in 1979, and remained their drummer until his death in 1996. After Mel died, his son Leon Taylor replaced him, and has been the Ventures' drummer ever since. 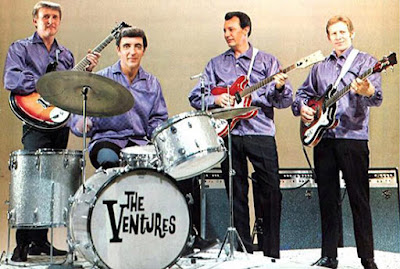 Drumming style
Taylor used the traditional grip as opposed to the matched grip. He originally started out with The Ventures on a 4-piece drum kit with just hi-hats and a single cymbal. Towards the end of the 1960s, he expanded his kit to include multiple tom-toms and double bass drums; he eventually added numerous crash cymbals to his set as well. Taylor used many drum kits over the years including Rogers, Ludwig, Gretsch, and Canopus. Taylor preferred Zildjian cymbals, Pro-Mark drumsticks, and Remo drumheads.
https://www.drummerworld.com/drummers/Mel_Taylor.html 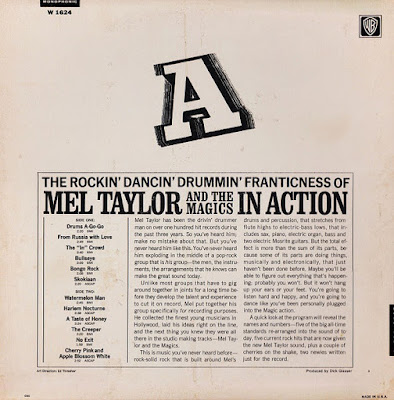