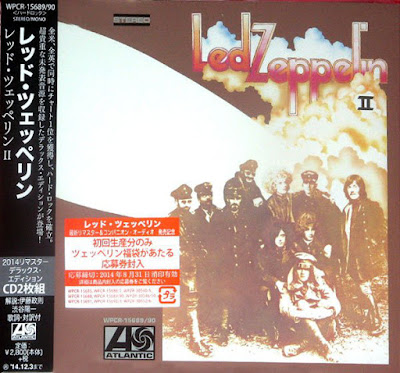 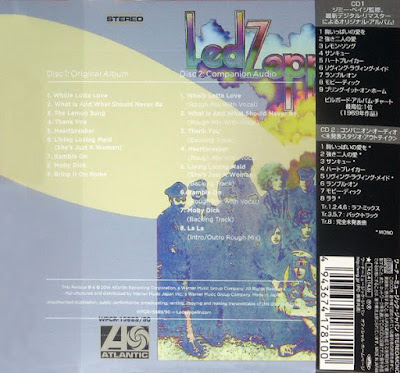 Recorded quickly during Led Zeppelin's first American tours, Led Zeppelin II provided the blueprint for all the heavy metal bands that followed it. Since the group could only enter the studio for brief amounts of time, most of the songs that compose II are reworked blues and rock & roll standards that the band was performing on-stage at the time. Not only did the short amount of time result in a lack of original material, it made the sound more direct. Jimmy Page still provided layers of guitar overdubs, but the overall sound of the album is heavy and hard, brutal and direct. "Whole Lotta Love," "The Lemon Song," and "Bring It on Home" are all based on classic blues songs -- only, the riffs are simpler and louder and each song has an extended section for instrumental solos. Of the remaining six songs, two sport light acoustic touches ("Thank You," "Ramble On"), but the other four are straight-ahead heavy rock that follows the formula of the revamped blues songs. While Led Zeppelin II doesn't have the eclecticism of the group's debut, it's arguably more influential. After all, nearly every one of the hundreds of Zeppelin imitators used this record, with its lack of dynamics and its pummeling riffs, as a blueprint.

Led Zeppelin launched a massive reissue campaign in 2014, supervised by Jimmy Page. The album proper has been remastered but the centerpiece for this deluxe edition, as it is for its companion reissues, is an additional disc of unreleased bonus material. Page dug through the Zeppelin archives to find rare -- and often un-bootlegged -- recordings, relying on alternate mixes and backing tracks but occasionally excavating unheard songs. The bonus disc on Led Zeppelin II does contain an entirely unheard song: the organ-led instrumental "La La," which is notably different than anything else Zeppelin ever did. Its chipper organ refrain by John Paul Jones feels nearly sugary, a mood that's broken when Page comes crashing in with acoustics and trebly guitar overdubs. "La La" simultaneously looks back and forward, evoking some of the Yardbirds' Little Games, even a bit of "Beck's Bolero," throwbacks to be certain but its mini-suite construction suggests the more ambitious territory the band would soon explore. Elsewhere, Zeppelin are looking neither to the past or future; they're simply living in the present, a reflection of how Led Zeppelin II was recorded on the road. As a finished album, this quickness lent a vitality to the heavy blues and rock but the outtakes on the bonus disc don't pack many major revelations and, as such, it pales slightly to the companion supplemental material on Led Zeppelin and Led Zeppelin III. Nevertheless, this is worthwhile for serious Zepheads. There are notable difference here and there -- "Whole Lotta Love" feels different, with its midsection freakout tamed and Robert Plant's vocals somewhat restrained; it's also interesting to hear "Moby Dick" presented as just a set-up riff and conclusion, lacking John Bonham's solo -- but the lasting impression of these rough mixes and backing tracks is how much Page added in his final production. "Ramble On," in particular, shows how Page's expert overdubs expanded the emotional template of a song and the contrast is fascinating, as is hearing the basic backing track of "Living Loving Maid." Stripped of Plant's vocals and all of Page's guitar coloring, including solos, it's possible to focus on the essential groove of Page, Jones, and Bonham, which is something of a wonder to behold

1-2 What Is And What Should Never Be 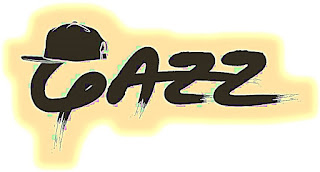