Patsy Ann Noble enjoyed performing careers in Australia and England before turning to acting in the late '60s. She was born into a family of performers in Australia: her father Buster Noble was a popular comic, singer and dancer while her mother, the former Helen de Paul, was a choreographer and stage producer. As a child, she appeared in various productions of her parents, and became a performer in her own right on a popular radio program in 1950. Noble studied singing and dancing, and was qualified to teach ballet at the age of 14. She subsequently became the lead singer and featured dancer in her parents' production of a revue called International Follies. Noble's television debut followed in 1960, and was signed as regular performer on Bandstand, a weekly Australian musical showcase. A recording contract with the Australian division of HMV Records -- a unit of the EMI group -- led to the release of her first single, "I Love You So Much It Hurts," in late 1960. "Good Looking Boy," released a year later, charted in both Sydney and Melbourne (Australia didn't have an established national record chart in those days), and led to the release of Noble's first album, Just For You, which was given the first Logie Award ever granted for Best Female Singer. Her success as a singer didn't distract Noble from her acting, and she appeared in serious theatrical productions during this period.
Having gone about as far as music could take her in Australia, Noble headed for England in 1963, and started at the top when she ended up making her BBC debut alongside the Beatles; Noble and the band ended up making several televised appearances together, and she seemed poised for a major singing career, issuing a fine girl group-type record in 1963 with "Don't You Ever Change Your Mind" b/w "Sour Grapes." She was a regular panelist on Juke Box Jury and also appeared in the jukebox musical Just for Fun, and got a singing spot in one episode of Secret Agent/Danger Man. Somehow, the success never came to Noble as a singer, despite appearances at the London Palladium and the Paris Olympia Theater, and by 1966 she'd begun to emphasize her acting once again, though she continued to record sides for Polydor until late in the decade. It was as Trisha Noble, with her hair dyed blonde, that she enjoyed considerably more success, both in England and America, on television series such as Executive Suite and Strike Force, and in feature films, including Star Wars Episode 1: The Phantom Menace 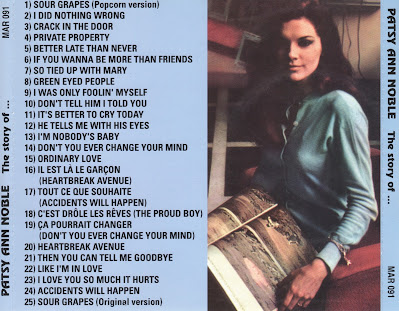