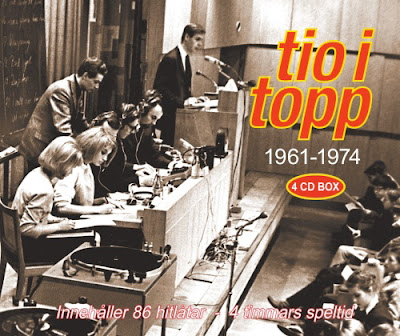 Tio i Topp (The top ten) was the name of a Swedish pop radio show,which was regularly aired weekly in 1961-1974. 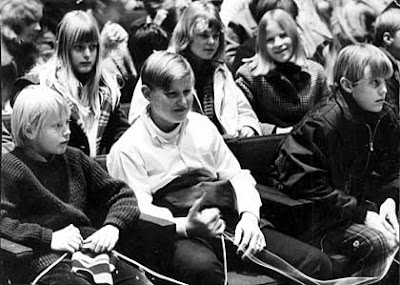 Tio i Topp – Swedish Music Charts in the 1960s
About Tio i Topp (Swedish Voting Charts)
Tio i topp was the first real charts of recorded music in Sweden, launched by Swedish Broadcasting (Sveriges Radio), on October 14, 1961.
The radio show started partly as an answer to the similar charts presented by Radio Nord, an offshore commercial station that operated briefly from 8 March 1961 to 30 June 1962 outside Sweden. Radio Nord presented a “Top 20” chart list once a week and the program became very popular.
Swedish Broadcasting had started a new channel, P3, at this time and wanted to attract a younger audience. Pop and rock music were rarely played on Swedish Radio in those days, and Tio i Topp became one of few radio shows for younger people.
The First Tio i Topp Show
The first aired show was commonly regarded as a disaster. The host was the Swedish singer Lill Lindfors. She had very little radio experience. Since the show included a voting procedure it dragged on much longer than expected.
The show, however, soon found its form and became extremely popular in Sweden during the sixties. Perhaps even more popular than anybody could imagine at the time.
Tio i Topp Influenced Swedish Pop Music
Tio i Topp also had a great influence on Swedish pop music. Having a hit on Tio i Topp was almost a must for any Swedish pop artist and some artists were willing to go to any length to get it. In the mid-sixties the group Science Poption was banned from the list when it was discovered that they had tried to influence the jury.
The Voting Procedure
Tio i Topp was compiled through the votes of one or two studio audiences. The basic set up was to have one audience in Stockholm and one in another city in Sweden, which sometimes explained why local artists reached a top position one week but disappear from the charts the next. In 1966, the number of participating cities was increased to three. In addition, Stockholm later lost its status as obligatory city.
Votes were collected through a silent mentometer system, a system credited to Carl-Eiwar Carlsson. To illustrate that voting was in progress, Carl-Eiwar used a toy machine gun to make a clattering sound.
The initial voting rules were somewhat complicated. They required the audiences to vote in three steps. Out of 10 songs, 5 new songs were to be picked each week to compete with last week’s 10 entries. These 15 songs were presented in the show and the audience was first asked to disqualify 5 of them. Out of the 10 remaining songs, they were supposed to pick one favorite. In 1963, the three-step voting was replaced by one single voting session.
The mentometer system was replaced in 1968 and voters instead gave their votes before the show and over the phone.
Sommartoppen
During the summer months between 1962 and 1966, Tio i Topp was replaced by Sommartoppen – a modified version of Tio i Topp with an audience in only one city somewhere in Sweden. (Article about Sommartoppen in Swedish )
The Last Show
The last show was aired on June 29, 1974. The board of Swedish Broadcasting had decided that the program preserved young people’s musical taste in favor of imperialistic interests. Reference to imperialism during these years, no matter how realistic, was almost always a sign that the person was on the left side of the political spectrum. This was most certainly true about Swedish Broadcasting in 1974.
The last show was presented by Kaj Kindvall, who later hosted Poporama, Discorama, and Tracks (a radio show that he hosted for 26 years).
The last number one on Tio i Topp was Sugar Baby Love with The Rubettes
https://ultimate60s.com/tio-i-topp-swedish-music-charts-in-the-1960s/
https://ultimate60s.com/category/tio-i-topp/ 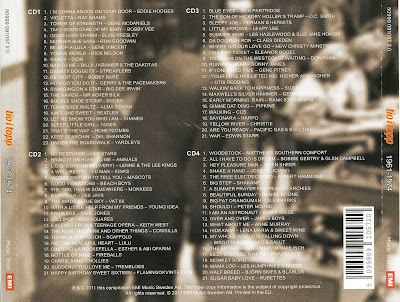