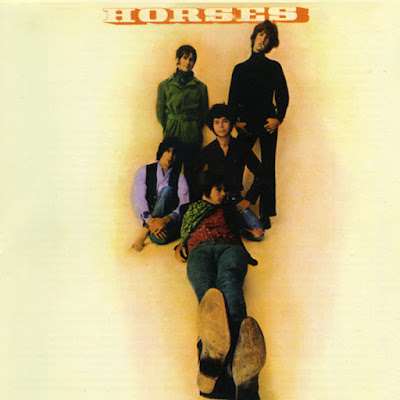 Not quite the forgotten gem that record-collector hype has long maintained, Horses nevertheless has a lot going for it, especially for a one-shot, studio-only curio. The nucleus of the group that created the LP had its genesis in the excellent mid-'60s bubblegum-psychedelic outfit the Rainy Daze, which had a minor, Top 100 hit with the camouflaged ode to marijuana, "Acapulco Gold," in 1967. Denver radio host David Diamond had moved to Los Angeles in 1965 to kick off a new rock format called "Boss Radio" and brought the band with him. The tightly formatted, hits-only nature of his new gig didn't sit well with Diamond, so he soon moved over to KBLA, where he quickly became one of L.A.'s hippest and hottest radio personalities with the development of the psychedelic program The Diamond Mine, the beginning of the looser, more free-form underground FM radio. Frank Zappa was a fan and frequent listener, and it was Diamond's suggestion to the Doors that resulted in an international hit with the edited version of "Light My Fire." He also was the first to spin such classic songs as the Seeds' "Pushin' Too Hard," Iron Butterfly's "In-a-Gadda-Da-Vida," Nancy Sinatra's "These Boots Are Made for Walkin'," the Stone Poneys' "Different Drum," the Rolling Stones' 17-minute "Goin' Home," and, yes, the Rainy Daze's "Acapulco Gold." Diamond played an important role during the band's life-span, convincing an increasingly erratic Phil Spector to sign them to a management contract and then, when the significant publicity push Spector had planned didn't pan out, arranging a deal with UNI, which released the group's fine LP. The quintet's catalysts were Tim Gilbert, the lead vocalist and guitarist, and John Carter, the lyricist. The two developed into one of the more interesting minor songwriting team's of the era. They scored a huge, Number One hit with Strawberry Alarm Clock's "Incense and Peppermints," and placed compositions with Yankee Dollar and the intriguing David Axelrod-produced West Coast outfit Hard Water (famous, fellow ex-Colorado surf/instrumental unit Astronauts in disguise), but Carter and Gilbert's pet project was the quasi-psychedelic, hard rock group Horses, which they built from scratch along with Diamond after all three relocated to San Francisco in 1969.

Private DancerThe Rainy Daze broke up following several post-LP singles on the Turtles' label, White Whale. Carter and Gilbert, meanwhile, had written an entire album, and now needed a band to record it. With Diamond, they held auditions and ultimately assembled Dave Torbert on bass, Scott Quigley and Matt Kelly on guitars, Chris Herold on drums, and lead singer Rich Fifield. Fifield was replaced midway through the recording sessions with an unknown 18-year-old kid, Don Johnson, in his first professional gig. The resultant, self-titled album was a strong effort, mixing tongue-in-cheek counterculturalisms ("Class of '69" was a carefully couched song about a sex act) and hippie-fied country elements into its hard rock, but also, unfortunately, came out on White Whale just at the moment that the label was beginning to come undone. (It was reissued on CD by Gear Fab in 2003.) Horses did not last far into 1970, though two of its songs, "Overnight Bag" and "Asia Minor," had a second life with Kingfish, who recorded them on their first LP. Kingfish, incidentally, were founded by Herold and Torbert (who also later joined New Riders of the Purple Sage) along with the Grateful Dead's Bob Weir in 1975. Kelly, too, later guested on several Dead albums in the '70s, and released a pair of solo albums on the group's Relix label. He had also been in the band Gospel Oak, which recorded a 1970 LP. Quigley later played with the Sammy Hagar Band before perishing from a drug overdose. Gilbert went on to record a pair of singles under his own name, while Carter, in addition to continuing to contribute songs to other artists, became a top producer for Capitol Records, working with the Motels, Bob Welch, and Tina Turner (the international hit Private Dancer). Diamond continued as an ace radio DJ, and also became a successful novelist. Johnson, of course, became a worldwide superstar as a film and television actor, most memorably in the iconic '80s cop series Miami Vice. 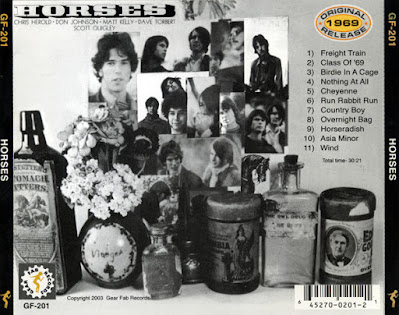