VA - Better Than The Beatles 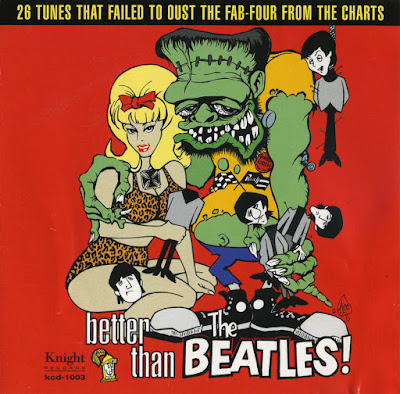 Almost certainly an unauthorized collection, this 27-track CD gathers more than two dozen novelties cut in the immediate aftermath of the Beatles' conquest of America. It's important to point out that these are for the most part novelties exploiting the explosion of Beatlemania, and not imitations. You can tell as much from some of the titles and group names: "We're the Weevils" by the Weevils, "Buggs Vs. Beatles" by the Buggs, "The Beatle-Bomb" by the Exterminators, "The Guy With the Liverpool Hair" by the Outsiders, "Ringo Boy" by Dorie Peyton, "I Want to Be a Beatle" by Bobby Wilding, and so forth. Like much novelty exploitation, it's not great music, but it has definite historical/curiosity/pop cultural value as a sampler of a fringe side effect of Beatlemania. If you were to take this with unwarranted sociological seriousness, many of the songs seem not so much a celebration of the Beatles as a reaction to a threat, with the group far more a target of satire than adulation. There's an irony, too, that in these takeoffs on and jabs at the Fab Four, the music itself is either in the early-'60s frat rock/surf/twist mode that the British Invasion would soon make obsolete, or pretty dire attempts to emulate Merseybeat, or some sort of combination of the two. Nonetheless, there's some good fun to be had, even with the bad cuts, and it certainly gives college radio DJs good light (and obscure) fodder for the play list. Some of the cuts are even modestly enjoyable on musical merits. The Outsiders' "The Guy With the Long Liverpool Hair" (apparently not by the Outsiders famous for "Time Won't Let Me") is fairly good hard-driving faux tough Merseybeat. So is Tony Rivers & the Castaways' "I Love You," which actually has no direct Beatles references in the lyrics, was by a real British group, and was apparently chosen simply because it sounds like the early Beatles (and also isn't that rare, a much better-fidelity version appearing on the legitimate RPM release The Tony Rivers Collection, Vol. 1: Castaways). 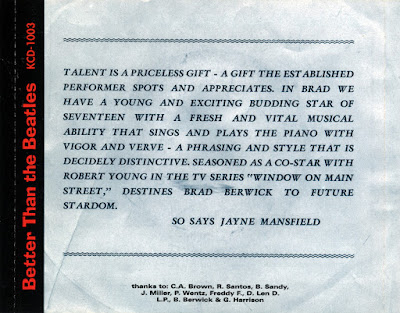 There are some girl groups here too, like the Beatle-ettes doing "Only Seventeen," which sounds like a weird hybrid of Merseybeat and Lesley Gore's "She's a Fool," and the Swans with "The Boy With the Beatle Hair," which has the dippy circa-1963 girl group sound of acts like the Murmaids (of "Popsicles and Icicles" fame). There are even some musicians who achieved fame, like Gene Cornish & the Unbeetables, led by the future member of the Rascals (though the two songs here aren't good); Ernie Maresca, who had a big 1962 hit with "Shout Shout (Knock Yourself Out)," and whose "The Beetle Dance" is pretty crummy; and Gary Usher, famed as a songwriter/producer who worked with the Byrds and the Beach Boys, and whose flop single "The Beetle" is on this CD. This doesn't contain every Beatle novelty by any means. Conspicuous by its absence is "Ringo, I Love You" by Bonnie Jo Mason, an early pseudonym for Cher, which is actually pretty gutsy and one of the best Beatles novelties, and ex-Crickets member Sonny Curtis' "A Beatle I Want to Be." Also missing is the only Beatle novelty to make the Top 40, the Carefrees' "We Love You Beatles, Oh Yes We Do," although a snatch of it's heard on the annoying, unnecessary "bonus track." Indeed, there probably would have been enough for a two-CD set; perhaps more was being saved for a second volume. It would have been nice if there were even a shred of documentation: There are absolutely no liner notes or original release labels and dates, though some of the labels of the original 45s are reproduced in the booklet. 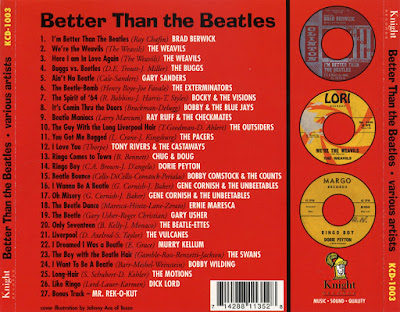