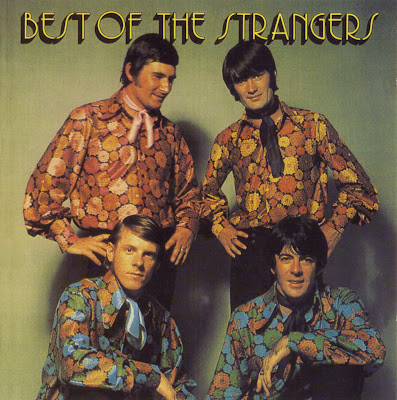 The Strangers was a Melbourne based Australian band that existed from 1961 to 1975. The band started out playing instrumental songs in a style similar to The Shadows with influences from Cliff Richard. The original lineup included Peter Robinson (bass), Graeme ('Garth') Thompson (drums), Laurie Arthur (lead guitar) and Fred Weiland (rhythm guitar). Robinson had previously played with The Thunderbirds, and went on to replace Athol Guy in The Seekers from the late 70s.

In 1966 The Strangers became the resident backing band on the Melbourne based teenage television pop show The Go!! Show in which they appeared each week from 1964 to 1967. After The Go!! Show ended, they became the resident vocal group on HSV-7's Sunnyside Up program. In all, the band appeared on television at least once a week for nine years straight.
At the end of 1962 they signed with Ron Tudor's W&G Records after working as studio band for artists including The Seekers, Frankie Davidson, and Johnny Chester.
In 1964 they supported Colin Cook and released an LP called Colin Cook and the Strangers. Charting songs in the Stranger's own name included their first single Cry of the Wild Goose (an instrumental by Terry Gilkyson) / Leavin' Town which was released in January 1963 and reached number 12 on the Melbourne charts. This was followed by three original instrumentals in Torlido / The Outcast and Undertow, which were released in 1963, and two of which reached the Top 40. Other singles included Happy Without You (Kenny Laguna, Shelley Pinz. 1968), Melanie Makes Me Smile (Tony Macaulay, Barry Mason. 1970), Looking Through The Eyes of a Beautiful Girl (1970), If You Gotta Make a Fool of Somebody (Rudy Clark, 1965) and Western Union (Mike Rabon, Norman Ezell, John Durrill. 1967).
During the mid-1960s, the band changed labels from W&G Records to Go Records and then to Philips and finally in 1970 onto Fable.
Arthur left the band in early 1964, and was replaced on lead guitar by John Farrar who later married Pat Carroll. Carroll and Olivia Newton-John appeared on The Go!! Show as singers. Farrar later joined British post-Shadows group Marvin, Welch & Farrar and then the re-formed Shadows.
Also in 1964, the band supported Roy Orbison and Paul and Paula on an Australian tour which featured The Surfaris and The Beach Boys. These support gigs influenced some early vocal recordings in Poppa Oom Mow Mow, Sunday Kind of Love, If You Gotta Make a Fool of Somebody and later In My Room, a Beach Boys ballad.

07 - Will You Love Me Tomorrow

16 - Looking Through the Eyes of a Beautiful Girl

21 - Standing in the Shadows of Love

04 - Will You Still Love Me Tomorrow

07 - If You Gotta To Make A Fool Of Somebody

08 - The Son Of Hickory Holler's Tramp