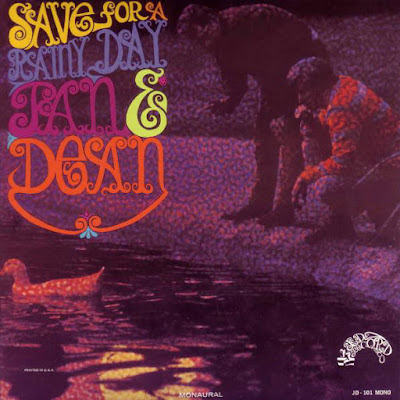 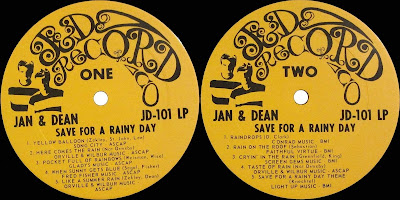 Unlike their friend Brian Wilson, who had previously guided the Beach Boys from surf band to cutting-edge pop/rock outfit without totally abandoning the band's signature sound, Jan & Dean didn't really have the capacity or songwriting chops to make the transition to serious and sophisticated pop. Nevertheless, when the architect of the duo, Jan Berry, was incapacitated in early 1966 by a terrible car accident that ultimately left him brain-damaged, Dean Torrence took up the business and musical reins of the band and made a nearly convincing one-shot stab at progressive pop with Save for a Rainy Day. In a sense, the album is still more commercial acquiescence than legitimate artistic statement, yet it is perhaps the most interesting musical stretch in the duo's catalog -- although it is a Jan & Dean album in name only rather than in practice, as Berry understandably does not appear on the album in any capacity. The album is conceptual, in the loosest sense of the word, in that each song is about or refers to rain and is held together like a song cycle by thunderstorm sound effects. In addition, most of the tracks were also created by Joe Osborne and Larry Knetchel, as well as another of Torrence's friends and neighbors, James Burton. As opposed to an opulent studio creation, however, most of Save for a Rainy Day was stitched together in Osborne's garage. Jan & Dean's version of Gary Zekley's "Yellow Balloon" uses the very same backing track that Zekley made for the group Yellow Balloon, and is nearly as good as that version, while "Lullaby in the Rain" is a heartbreakingly pensive hymn. On the other hand, the music occasionally dips into uncomfortably sappy sentiment and easy listening sounds. Nevertheless, the album really is a lovely Californian artifact and worthy blue afternoon listen. [The Sundazed reissue nearly doubles the length of the original album with bonus cuts, most of them instrumental tracks and stereo versions of the album songs, and includes typically definitive liner notes, although the authors have a tendency to wax excessively rhapsodic about the music inside.