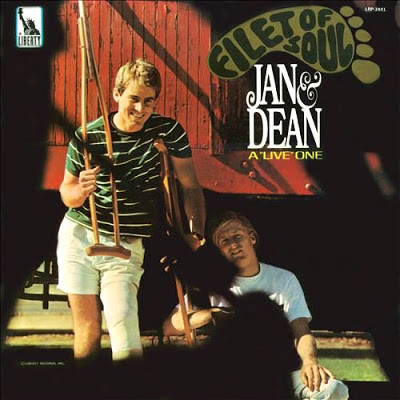 Review by Bruce Eder
Filet of Soul is a good example of a successful "fake" -- oh, it's real enough as a Jan & Dean album, and the recordings here are all the real article and enjoyable, even if most of them are hardly representative of the duo at its best. Mostly the album works because it slots into the parody element that always played a role in the duo's presentation -- though Jan & Dean were meticulous in their productions, and Jan Berry a very serious personality in terms of his work, there was always a strong component of laughter in their music, and they never took themselves (or rock & roll) too seriously. And it's entirely possible that, had events worked out differently, the Beatles' Rubber Soul album (itself a parody title) might have inspired the pair to devise an "answer" record. But Filet of Soul was actually the creation of Liberty Records, in the wake of Jan Berry's disastrous April 1966 car accident, to keep some Jan & Dean product out there and sell it while the notoriously fickle teen audience still remembered who they were. By scouring the unused portions of the concert tape that had yielded the pair's live Command Performance album, plus a few studio tracks that had already been heard on other albums, a coherent Jan & Dean album was devised, complete with three John Lennon/Paul McCartney songs. None of the latter, most especially the utterly improbable "Norwegian Wood," are exactly groundbreaking, nor is the album a landmark of any kind, but like almost every other record that Jan & Dean ever issued, it is lots of fun (though the "fun" is stretched just about to the breaking point with their rendition of "Everybody Loves a Clown," which is saved for last, for obvious reasons). With a live audience ambience behind their deliberately adenoidal harmonies on "You've Got to Hide Your Love Away," you know that this is no more a serious effort to "interpret" the song than, say, the Beach Boys' version from Beach Boys' Party! (recorded the previous year with Dean Torrence on hand). Jan & Dean are obviously more straight-faced on "Let's Hang On," "Honolulu Lulu," and "1-2-3," and the 1964-vintage "Dead Man's Curve," with its elaborate production, stands apart from everything else here, showcasing the offhanded nature of most of the material on this album. 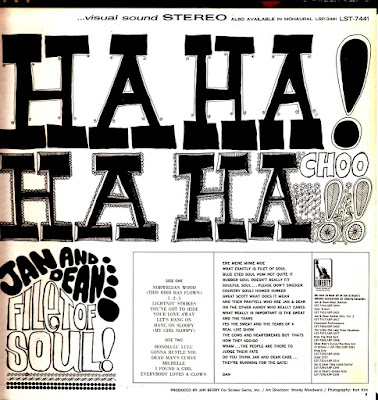