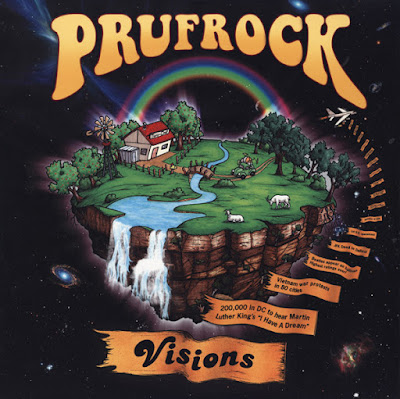 Visions was recorded in 1967 at a small studio near LA. It was first released in 07 on vinyl through RD Records. This is its first release on CD. It is a rare recording of music that captures the mood and the times of that "Summer of Love". Early in 67 Tom Lubin had produced an album at Two:Dot Studios on a four track. When the owner upgraded to an 8-track, he asked Tom to make a recording that could show the studio's new capability. Tom brought together some friends, and Prufrock was born. By October Prufrock had recorded an eclectic collection of songs to form the album Visions. There was one major problem - Prufrock loved to record but two of them didn't want to perform. In late 67 Tom was hired as an assistant engineer at the legendary Gold Star Studios. So that Prufrock had something to remember, when no one was around at GS, he made 6 acetates of Visions. Each of the band members, the guitar player and Two:Dot got one. Several song demos were also made for a publisher who liked the songs. But Prufrock 's Visions was never released. That was the end of it, or so it seemed until mid 2006. It seems one of the publisher demos had found its way to Europe and one song "Too Young" was released in Austria on a sampler of rare recordings of the 60s. A couple of years later the acetate was pictured in a rare record collector's book. The Gold Star label had the song title with Lubin as producer. So, from an acetate label seen in a book to a Google Search, he was found and contacted by e-mail. "Dear Sir Are you the Tom Lubin who produced and engineered the band Prufrock in 1967....?" Tom was floored. It seems the sender was a fan of 60s music, and had a label that released recordings of that era. He was based in Switzerland and had heard only the one song of Visions. Over time and situations things disappear, but a few years ago Tom had gone into a studio and transferred all the tapes he had in a box to digital, and Prufrock's Visions was one of them. Once RD heard it, they wanted to give it its first release and to be completely authentic, on vinyl. Prufrock's Visions stands on its own, not as just an interesting rare artefact. It is an amazing sounding recording made with basic multi-track equipment in the middle of no-where. The songs powerfully reflect the raging time in which they lived. The Vietnam war, the draft, civil rights, assassinations, social unrest, the cold war, the bomb, political protest, free love, the pill, getting stoned, hippies, the British invasion, Timothy Leary, Haight-Ashbury, LSD. The baby boomers were coming of age and soon would be in charge. So many of those songs of 40 years ago continue to resonate in the present day. This is an album worth having. To find out more about Prufrock the times in which Visions was made, and hear samples of this album visit You'll be blown away. 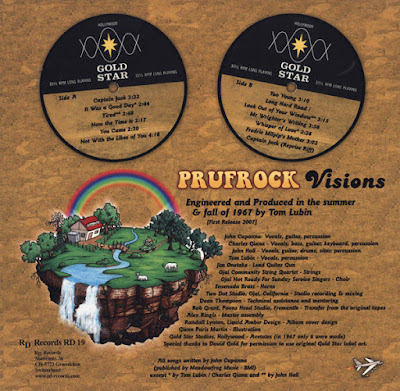