The Mutual Understanding ‎– In Wonderland (1968) 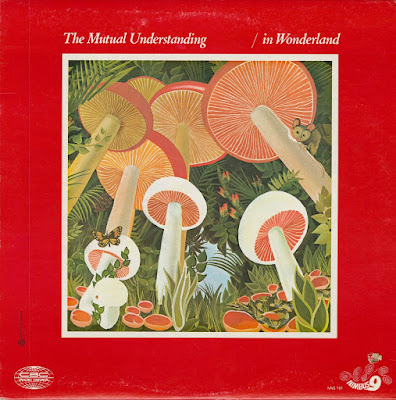 For many born after 1968, the group vocal and orchestra sound of the Mutual Understanding’s In Wonderland may seem like the product of another dimension. Despite releasing a handful of recordings, the Mutual Understanding was not a group in the traditional sense, but rather a connected collective of Toronto, Ontario-based producers, arrangers, session musicians, and singers, brought together to create musical magic. In Wonderland is an album that harkens back to a gentler and more innocent time. It also represents the birth of the Canadian music business as well as the role of advertising and television in music. Producers Jack Richardson and Dave Bird brought the Mutual Understanding to life (with some conceptual ingenuity from maestro Ben McPeek). The “group,” if you will, was comprised of three top Canadian arrangers, the aforementioned McPeek (who also acted as the Mutual Understanding’s musical director), Jerry Toth, and Jimmy Dale. Next came vocal leader/director Laurie Bower and his fellow Mutual Understanding singers: Tommy Ambrose, Vern Kennedy, Kathy Collier, Patty Van Evera, and Rhonda Silver. Musical backing was provided by the crème de la crème of the local jazz and studio scene, which included a handpicked selection of players such as Peter Appleyard, Guido Basso, Moe Koffman, Rob McConnell, and Jack Zaza. Initially recorded as a broadcast-only release for the Canadian Broadcasting Corporation (CBC), In Wonderland [LM 48] later saw a commercial release on McPeek and Richardson’s freshly minted Nimbus 9 record label [NNS 101], an imprint that grew out of the McCann-Erikson advertising agency.

Despite the world-class performances and high quality recordings captured at Toronto’s Hallmark Recording studios, In Wonderland simply didn’t resonate with the Canadian record buying public upon its release in 1968. Though two 7” singles (“Wonderland” b/w “Pretty People” [NNS-9003] and “San Jose” b/w “Everybody Loves My Baby” [NNS-9006]) were released to help boost visibility and received some fragmented radio play across Canada, the album sat quietly on the shelves of Canadian music shops such as Sam the Record Man on Toronto’s bustling Yonge Street. Even McCann-Erikson art director Nick Speke’s intriguing Alice In Wonderland-style cover painting wasn’t enough to draw music fans into the sweet sounds inside. Commercialism be damned (or desired), Speke’s original artwork also adorned the Guess Who’s Wheatfield Soul [NNS 102] and the 1969 self-titled release from Bonnie Dobson [LM 64, LSP 4219], both exemplary examples of album sleeve design. Any which way, the swinging 1960s-meets-the-classics feel of In Wonderland wasn’t rock and roll enough for younger audiences, yet it was likely too progressive and hip for older jazz aficionados. Proper distribution and lack of support on retail and radio levels only compounded the problem and caused the album to slip through the cracks for years. Unfortunately, this was not an uncommon problem for Canadian recordings of the era. Overshadowed by a steady influx of well-promoted discs from the United States and England, it took many decades for In Wonderland to find its rightful audience. As vinyl collectors from Asia and Europe starting scouring the used and delete record bins of North America in the 1980s and 1990s, the Mutual Understanding started to gain prominence in certain collector circles. It has now achieved cult status in Japan, England, and Korea. 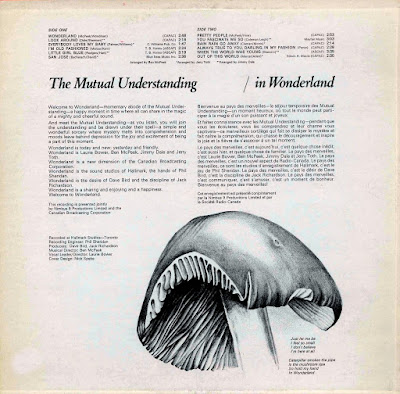