California girl group the Honeys was formed in 1961 by siblings Marilyn, Diane, and Barbara Rovell; originally dubbed the Rovell Sisters, the trio cut their teeth on the local amateur talent circuit, and in time Barbara was replaced by their cousin Sandra Glantz, who adopted the stage name Ginger Blake. Through producer Gary Usher, the Rovells were introduced to the Beach Boys' Brian Wilson, who agreed to produce the group. Rechristened the Honeys -- a nickname for female surfers -- they reeled off a series of outstanding Capitol singles including "Shoot the Curl," "Pray for Surf," and the Phil Spector homage "The One You Can't Have," none of which made any kind of commercial impact. A move to Warner Bros. preceded 1964's superb "He's a Doll"; on December 7 of that year, Brian Wilson and Marilyn Rovell were also married. Despite their continuing lack of chart success, the Honeys remained sought-after backing vocalists on sessions for the Beach Boys and Jan & Dean. During the mid-'60s, the trio also recorded as Ginger & the Snaps, although by the time of their 1969 swan song "Goodnight My Love" the Honeys name had been restored. When Blake left the group to pursue a solo career, Marilyn and Diane worked under the name American Spring, although the Honeys did eventually reunite for a disappointing comeback record, 1983's Ecstasy. 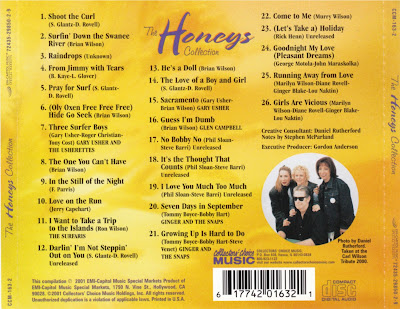 Fans of the Beach Boys will definitely be interested in this collection from the Honeys, a girl group trio including Brian Wilson's wife Marilyn, plus her sister Diane, and their cousin. Signed to Capitol, thanks to Wilson, most of the Honeys sessions were supervised by Wilson himself, occasionally with Capitol's in-house producer Nik Venet. The Honeys Collection brings together 26 tracks covering the group's early- to mid-'60s singles (and several backing vocal dates on records by other artists), plus two tracks from a 1983 comeback LP. The first phase of the Honeys was as a surf group ("honeys" was a term used either for female surfers or the girlfriends of male surfers), and their first single, "Surfin' Down the Swanee River," was produced by Brian Wilson from an idea for a novelty take-off on the folk classic "Swanee River." Fortunately, the group soon moved on from surf novelties to embrace the classic girl group sound of Phil Spector -- a big influence on Wilson professionally -- and the bulk of the Honeys' best material is in this grandiose vein, high-drama songs like "Raindrops," "The One You Can't Have," and "He's a Doll." Besides the value for Beach Boys fans, the solid production muscle behind the trio results in some great examples of '60s girl group pop. The compilers also added several tracks with backing vocals by the Honeys, including the early Glen Campbell gem "Guess I'm Dumb," written and produced by Wilson himself.