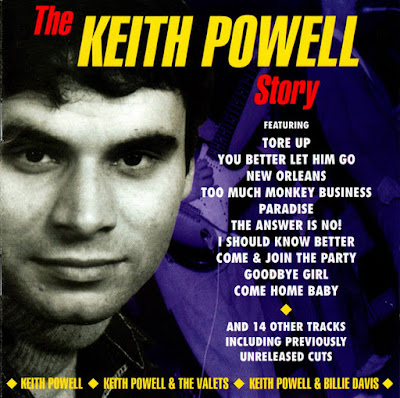 A blue-eyed soul singer from Birmingham, Keith Powell released almost a dozen British singles in the mid-'60s without making the charts. Judged against other British soul (as opposed to rock) vocalists of the time, he wasn't bad, with a deep voice and expressive delivery, but unlike Chris Farlowe and John Baldry -- two peers who, at least from the recorded evidence, were not as talented -- he couldn't find hit material. His first three singles (in 1963 and 1964) were recorded for Columbia with his backing group, the Valets, a combo featuring brass and organ, somewhat in the style of a muted Georgie Fame. After moving to Pye in late 1964, the Valets would no longer play on his records; producer John Schroeder steered him toward melodramatic soul ballads with strings, produced in a fashion that recalled Jerry Butler's mid-'60s material. With Pye, Powell released eight singles in 1965-1966, three of which were male-female duets with Billie Davis (who had made the British Top Ten with a cover of the Exciters' "Tell Him"). The results weren't bad, if a bit lugubrious, but were not rewarded by commercial success. 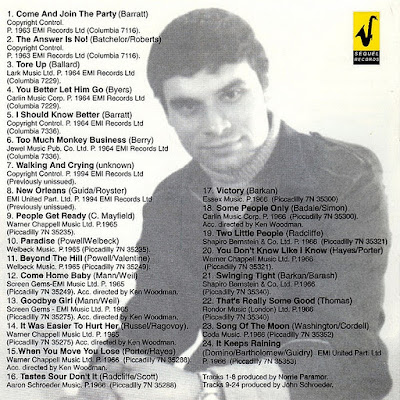 Both sides of his eleven 1963-66 singles (including his duets with Billie Davis), as well as a couple of unreleased tracks. There isn't much similarity between this stuff and the classic British Invasion sound; it has much more of a horn-organ-string feel, with production that is trying to emulate (with pale results) early-'60s American soul and R&B records. Powell was an okay singer, and his records weren't bad, but he wasn't exceptional, and there's little that makes you wonder why he didn't get a hit. "I Should Know Better," athough, is a lost gem of sorts with its swirling organ, pleading vocal, and memorable tune; "Beyond the Hill," a haunting number with a Latin-Euro feel (co-written by Powell), is pretty good too.

THANKS El mas frio for..