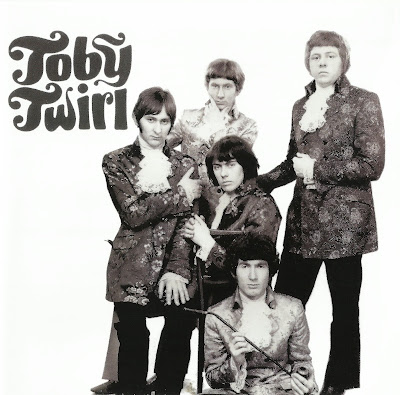 English band from Newcastle, England, founded in 1968 until 1971 when the group was disbanded. The band was named after a 1950's children's book character who happened to be a pig.

Toby Twirl emerged from the mid 60s club scene in Newcastle-upon-Tyne in the North East of England, and were originally called 'The Shades of Blue'. They were signed to Decca Records by Wayne Bickerton, and released three singles: "Back In Time", "Toffee Apple Sunday" and "Movin' In". Although critically acclaimed in later years, none of the singles charted due to lack of major radio play. The group concentrated on live work during the late 60s and early 70s and were a top draw around the North of England. The line up was Dave 'Holly' Holland (vocals), Barrie Sewell (keyboards), Stuart Somerville (bass), Nick Thorburn (guitar) and John Reed (drums). Stuart was replaced by Dave Robson after he was tragically drowned in Tynemouth and Holly was replaced by Steve Pickering.

Mega Dodo is proud to announce the release of a full-length album of unreleased recordings the band made in the late 60s. Several reels of tape were recently discovered by the band's drummer, John Reed, which have been carefully transferred to a digital medium and professionally mastered. 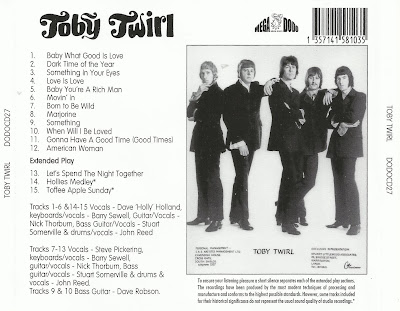 Originally from Newcastle, England, Toby Twirl was founded in 1968 and recorded three classic, and now highly collectable, singles for Decca in the late 1960s. This long overdue debut album mixes original songs with a selection of carefully curated hits of the day. The recordings were discovered by the band's drummer, John Reed, in a dusty box of reel-to-reel tapes in his attic. The band made several demo and showcase recordings at various studios in the late '60s, but they were thought lost forever. Reed's chance discovery uncovered a veritable goldmine of late '60s recordings by both line-ups of the band. Part 1 of the CD features vocalist Dave 'Holly' Holland, while part 2 features vocalist Steve Pickering.