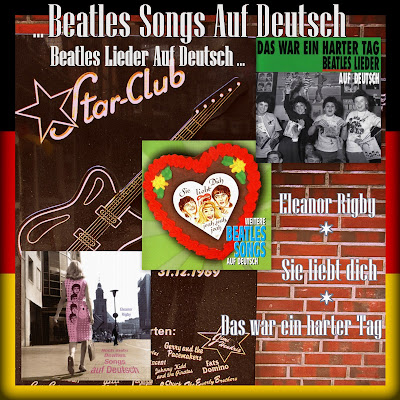 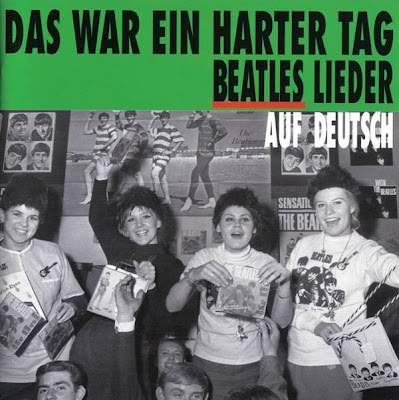 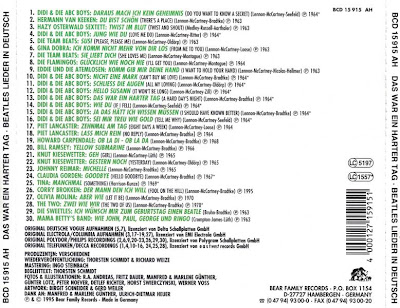 ***
Sure, to people outside Germany the concept of this 30-song compilation might seem daft: 1960s recordings by German artists, singing in German, covering Beatles songs. For someone looking for wacky and interesting Beatles-related ephemera, though, it's actually quite a fun listen, if nothing you would place among the best Beatles covers ever (let alone anything close to the original versions). You haven't heard of any of these singers unless you were living in Germany then (and maybe even if you were living in Germany then). For some reason, Didi & Die ABC Boys are heavily represented, with no less than nine songs. You won't get any help from the liner notes, which are brief, do not contain details on the artists, and (if you don't speak the language) are in German. Anyway, the pleasure, such as it is, in listening to this is in the unexpected weird variations. Sometimes, for instance, the verse-chorus structure will be messed with a little, or a little bit of the song (usually the chorus) will be sung in English and the rest translated into German. And even for those English fragments, considerable liberties are taken: the title phrase of "Love Me Do" is changed by Didi & Die ABC Boys to "I love you," for instance, and Howard Carpendale sings "life is cra-zee" instead of "life goes on, bra" in the chorus to "Ob-La-Di, Ob-La-Da." In at least one case, speaking and singing German turns out to be a definite advantage: in Bill Ramsey's "Yellow Submarine," the German U-boat dialogue in the instrumental break sounds, perhaps unsurprisingly, really convincing. All kidding aside, it's a true testament to the strength of the Beatles' melodies that even when sung in German, and by rather second- and third-rate acts, the tracks are still usually just plain enjoyable (and better than Bear Family's sequel compilation that also adheres to this concept, Sie Liebt Dich Jeah Jeah Jeah: Weitere Beatles Songs Auf Deutsch). It's also a credit to this compilation that it contains versions of some Beatles songs that were rarely covered by anyone in any language, like "I'll Get You," "It Won't Be Long," "There's a Place" (some really screechy female singers on this one, backing Hermann Van Keeken), and "Two of Us." To no one's reasonable objection, the concept is stretched a little bit to include four songs that, strictly speaking, aren't Beatles covers: versions of "Twist and Shout" (modeled on the Beatles' own cover), Claudia Gordon's "Goodbye" (a Lennon-McCartney number that had been a hit for Mary Hopkin, but was never recorded by the Beatles), and two 1963 Beatles "tribute" records, auf Deutsch of course. 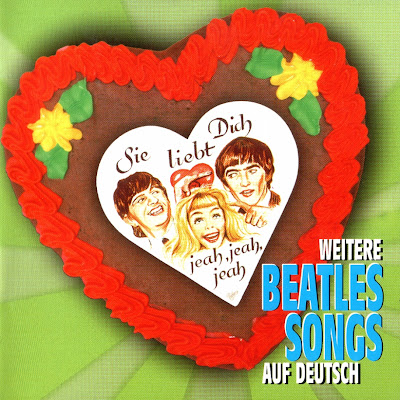 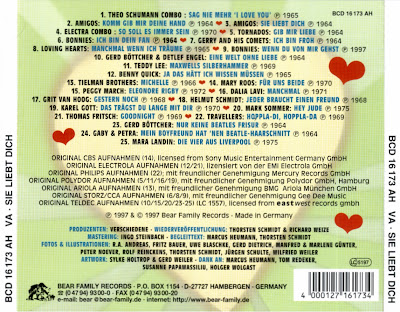 If you're looking for a gift for the Beatles-maniac who has everything, you could do worse than choose this 25-song compilation of German Beatles covers from the 1960s and early '70s. These were both made in Germany and sung in German; even American Peggy March qualifies, with her 1972 Deutsch-sung cover of "Eleanor Rigby." We're not talking any feats of brilliance here; it's just weird and fun to hear tunes like "I Call Your Name," "You're Going to Lose That Girl," "Things We Said Today," and even Lennon-McCartney songs that the Beatles didn't do ("World Without Love," "Bad to Me") performed earnestly (and sometimes stiff as a board) in an unfamiliar tongue. There are even some rare examples of East German beat from the Electra Combo and the notorious Theo Schumann; the lugubrious '70s covers by the dreaded German schlagers (as MOR vocalists were called over there) even have some campy charm, as on Mary Roos' easy listening cover of "And I Love Her." How often, after all, do you get to hear "Carry That Weight" or "Maxwell's Silver Hammer" in German? The compilers stretch the format a bit with some Beatles tribute records, as well as a cover of "Money" that was probably inspired by the Beatles' rendition rather than the original. With 25 songs and nearly 70 minutes, it certainly doesn't lack value for money. This is, by the way, a sequel to a similar Bear Family compilation, Das War Ein Harter Tag.

A faint sense of desperation leaks into the third volume of Bear Family's series of German-language covers (principally though not exclusively from the 1960s) of Beatles songs, following 1995's Das War Ein Harter Tag: Beatles Lieder Auf Deutsch and 1997's Sie Liebt Dich: Weitere Beatles Songs Auf Deutsch. You get the feeling the compilers were really scrambling to fill out the 26-track program this time around, including more songs from the 1970s (one from as late as 1978) and padding out the set with a higher quotient of Beatles tributes/novelties. There are, too, a few other songs that are not exactly Beatles covers, those being some early-'70s interpretations of early John Lennon, Paul McCartney, and George Harrison solo efforts. And finally, some of the selections are not so much Beatles covers as they are covers of songs the Beatles also covered, and not necessarily based on the Beatles' versions. Jan and Kjeld's "Ein Kuss Zum Abschied," for instance, is clearly modeled on Herb Alpert's "A Taste of Honey," not the 1963 interpretation of that same tune by the Beatles. A German-language 1969 cover of "Twist & Shout" by the very British Cliff Richard stretches the concept almost to its breaking point. It's silly to apply schoolmaster-like rules to anthologies like this, of course, which by their very nature are only out for a bit of silly fun. More problematically, however, there's not much fun to be had from the music, either on artistic or novelty/kitsch grounds. The covers are usually middle-of-the-road pop arrangements or unmemorably crude early Beatles-styled pseudo-British beat. There are also a couple of really inept ones to supply a few cheap yuks, those being Die Beat-Oma's Mrs. Miller-like warble through "Ich Bin Die Beat-Oma" (to the tune of "A Hard Day's Night") and Die 3 Spitzbuben's "Michelle," played in the manner of a lounge accordion trio, apparently with liberal comedic translation judging from the uproarious audience laughter, though the humor will be entirely lost on non-German speakers. Speaking of getting lost in the translation, even the titles let you know that much liberties were taken for many of these German recordings, with, for instance, "My Sweet Lord" translated as "Wo Ist Er" (where is he), "What Is Life" as "Nimm Die Welt Wie Sie Ist" (take the world as it is), "Penny Lane" as "Reeperbahn" (!), and "Uncle Albert/Admiral Halsey" as "Von Calais nach Dover" (double !). Winding the CD down are a half-dozen Beatle tribute discs, some of them early Beatles cash-ins along the lines of "Baby Beatle Song" and "Crazy Beatle Boots," and other drearier 1970s homages include Marianne Rosenberg's "Mr. Paul McCartney." This will fill out the collection of fans obsessed with Beatles ephemera, but even more than its two predecessors, it's more something to collect than to enjoy.