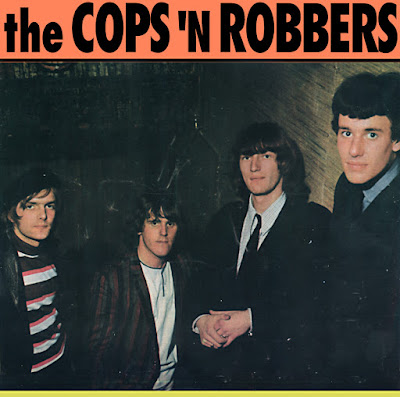 A little-known but quality group from the R&B wing of the British Invasion, the Cops 'n Robbers (named after a Bo Diddley song) issued just three singles in the mid-'60s, as well as a French-only EP. Their chief claim to fame is recording (and writing) the original version of "You'll Never Do It Baby," a cool, nasty R&B-rock raver that was covered by the Pretty Things on their second album. Cops 'n Robbers were indeed rather similar to the Pretty Things in their punky R&B-rock approach, yet even punkier than the Pretty Things (but not as sloppy as another sub-Pretties act, the Downliners Sect). Singer Brian "Smudger" Smith had an unrefined, sullen leer in his delivery, and the band was picked up by the same management team that signed Donovan (a friend of Cops 'n Robbers). They issued a good version of "St. James Infirmary" on Decca in late 1964, but after its failure moved to Pye for the rest of their meager recorded output, which included a bizarre, ill-chosen cover of the My Fair Lady standard "I Could Have Danced All Night." Drummer Henry Harrison joined the New Vaudeville Band ("Winchester Cathedral"), an act which could have been hardly any more of a polar opposite from his previous group. 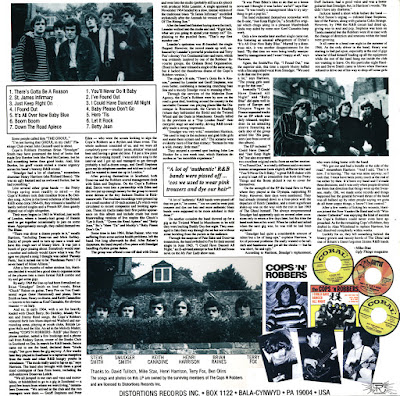 All 14 songs known to exist by the band -- both sides of their three singles, two tracks that only appeared on their French-only EP, and six blues-rock covers rescued from a 1964 acetate. "You'll Never Do It Baby," and with its compelling, jerky riff, is the clear highlight (although the Pretty Things cover is better); "There's Gotta Be a Reason" is also good moody early British R&B, while "St. James Infirmary," with its gloomy deep organ sound, is a worthy treatment of that covered-to-death standard. Otherwise, it's uneven sailing: an original ("Just Keep Right On") that sounds like Gerry & the Pacemakers trying to be an R&B band, the strange R&B version of "I Could Have Danced All Night," and six pretty routine covers of classics by Chuck Berry, Bo Diddley, and the like from a 1964 acetate. The album was remastered from singles and acetates, and the fidelity is often dull (though obviously there were limitations on what could be done with the acetates), yet this is still recommended to fans of bands like the Pretty Things for its appealingly grimy British R&B stance.