VA - Surfbeat Behind The Iron Curtain 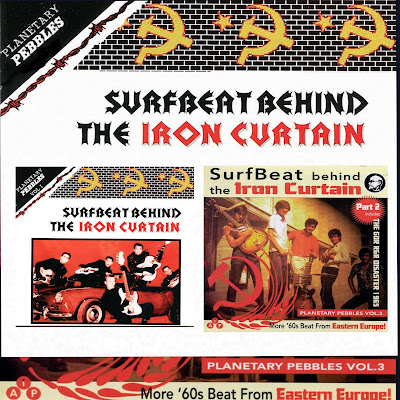 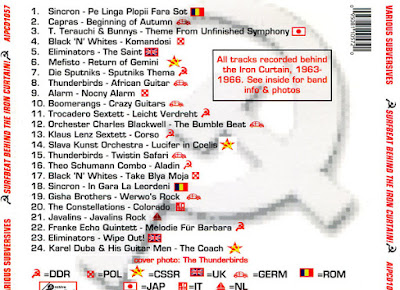 This is part of Archive International's Planetary Pebbles series.

Just when you think you've heard it all, along comes this compilation of '60s surf/instrumental rock from behind the Iron Curtain -- a scene that was barely even known to have existed, and whose bands were rarely given the opportunity to even record. Actually, the title is a bit of a misnomer, as 11 of the 24 tracks are actually from non-Communist countries, including West Germany, Japan, Italy, Holland, and the U.K. It's all still damn rare stuff, and surprisingly good, especially when you consider that when the Iron Curtain bands recorded, they usually had to do so on state-owned labels. This nonetheless holds up pretty well against the better instrumental guitar rock from the era, and is not so much influenced by surf music as by the Ventures, the Shadows, and the Tornados. The production (particularly for the Eastern European bands) can be primitive, but the playing can be hot, especially from the Japanese T. Terauchi, the East German Die Sputniks, and the Romanian Sincron. Acts from Poland and Czechoslovakia are also represented; the Czech Slava Kunst Orchestra has to be the weirdest (and most ridiculous) of the lot, with their berserk hybrid of twist rock, nonsense vocals, and wedding dance-band music. That track aside, this is actually a respectable compilation that's not solely of novelty value. ~ Richie Unterberger

Full Title - Surfbeat From Behind The Iron Curtain Vol 1. This CD consists mainly of ultra rare tracks from East Germany, Poland, Romania & Czechoslovakia.
----
* The compilation contains several errors in the liner notes, especially for the Polish releases that are credited to "Black 'N' Whites" and "Alarm", which are in fact album titles. The sound quality is  poor which maybe comes from taking the songs from original mono 7inches without licensing them. 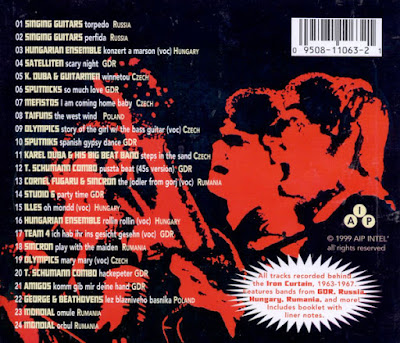 Part one of this series got a little flak because about half the tracks were recorded by bands that were not from behind the Iron Curtain. No such problem with the follow-up; all 24 cuts were done by groups from East Germany, Russia, Hungary, Romania, Czechoslovakia, and Poland between 1963-1967. Many of them are instrumental, and despite the "Surfbeat" in the album title, it's striking how much they're influenced not by surf music or the Ventures, but by the Shadows. Those galloping rhythms, the tremolo-laden sound with hints of country and Hawaiian music -- it's beyond a doubt that the Shadows, through radio broadcasts or clandestine means, were getting heard in Eastern Europe. Of course the recording conditions and execution were more primitive in these socialist lands, which puts on a layer of spookiness that gives it a certain charm. There are also some vocal numbers that show the more expected British Invasion influence, like the Olympics (from Czechoslovakia) singing in very clumsy English on "Story of the Girl with the Bass Guitar"; the East German Team 4, who sound like a credible American folk-rock garage band; and Romania's Mondial, who do a song that quite resembles Paul Revere & the Raiders' "Just Like Me." Oddly, the T. Schumann Combo (from East Germany) do a pretty faithful and competent cover of Booker T. & the MG's "Hip Hug-Her.