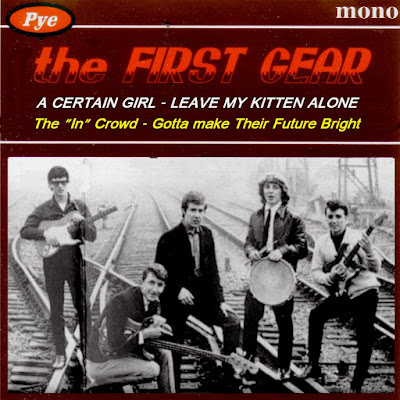 When the Beatles broke onto the charts in England in 1963, a lot of bands tried to emulate their mix of hard rocking guitar and harmony vocals. Others likely understood that they would have a better shot at breaking onto the charts with sheer muscle. That was The First Gear's approach, and it went double on "Leave My Kitten Alone." And in case the guitarists Phil Birkenshaw and Raymond Wafer couldn't pull it off, producer Shel Talmy had Jimmy Page standing by to play a break that wiped out the band's beat but must've boggled the mind of anyone who heard the B-side of the band's debut.

Dave Walton's lead vocals were good enough, and Ian Colling rose to the occasion at the drums, but it was a flip-side and it didn't get flipped over sufficiently. (Even the Beatles' own version of the song wouldn't get an official release for 35 years). They got one more single out under Talmy's guidance, a cover of Dobie Gray's "The In Crowd," before disappearing.