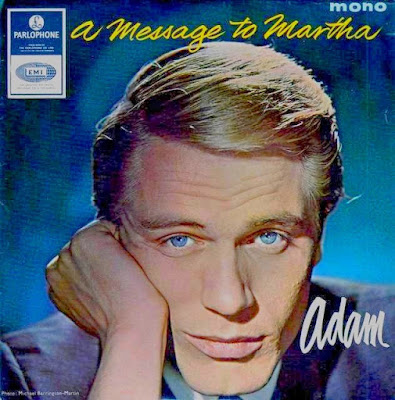 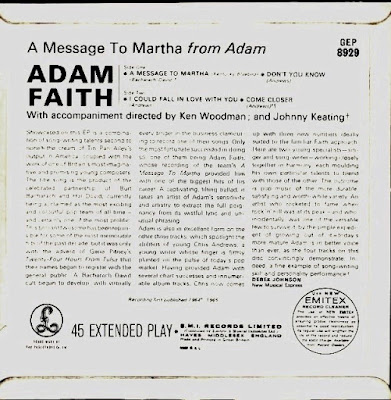 Terence Nelhams-Wright (23 June 1940 – 8 March 2003), known as Adam Faith, was a British teen idol, singer, actor and financial journalist. He was one of the most charted acts of the 1960s. He became the first UK artist to lodge his initial seven hits in the Top 5. He was also one of the first UK acts to record original songs regularly.
Terence Nelhams-Wright was born at 4 East Churchfield Road, Acton, Middlesex (now London), England. Known as Terry Nelhams, he was unaware his surname was Nelhams-Wright until he applied for a passport and obtained his birth certificate. The third in a family of five children, Nelhams grew up in a council house in a working class area of London, where he attended John Perryn Junior School. He started work at 12, delivering and selling newspapers while still at school. His first full-time job was odd-job boy for a silk screen printer.
Faith began his musical career in 1957, while working as a film cutter in London in the hope of becoming an actor, singing with and managing a skiffle group, the Worried Men. The group played in Soho coffee bars after work, and became the resident band at the 2i's Coffee Bar, where they appeared on the BBC Television live music programme Six-Five Special. The producer, Jack Good, was impressed by the singer and arranged a solo recording contract with HMV under the name Adam Faith.

His debut record "(Got a) Heartsick Feeling" and "Brother Heartache and Sister Tears", in January 1958, failed to make the charts. Good gave him a part in the stage show of Six-Five Special, along with the John Barry Seven but the show folded after four performances. His second release later that year was a cover of Jerry Lee Lewis's "High School Confidential", backed with the Burt Bacharach and Hal David penned "Country Music Holiday", but this also failed.

Faith returned to work as a film cutter at National Studios at Elstree until March 1959, when Barry invited him to audition for a BBC TV rock and roll show, Drumbeat. The producer, Stewart Morris, gave him a contract for three shows, extended to the full 22-week run. His contract with HMV had ended, and he sang one track, "I Vibrate", on a six-track EP released by the Fontana record label. Barry's manager, Eve Taylor, got him a contract with Top Rank, but his only record there, "Ah, Poor Little Baby"/"Runk Bunk" produced by Tony Hatch, failed to chart due to a lack of publicity caused by a national printing strike.

Despite the failure, Faith was becoming popular through television appearances. He became an actor by taking drama and elocution lessons, and appeared in the film Beat Girl. The script called for Faith to sing songs and as Barry was arranging Faith's recordings and live Drumbeat material, the film company asked him to write the score. This was the beginning of Barry's career in film music.

Faith's success on Drumbeat enabled another recording contract, with Parlophone. His next record in 1959, "What Do You Want?", written by Les Vandyke and produced by Barry and John Burgess, received good reviews in the NME and other papers, as well as being voted a hit on Juke Box Jury. This became his first number one hit in the UK Singles Chart, and his pronunciation of the word 'baby' as 'bay-beh' became a catchphrase.

"What Do You Want?" was the first number one hit for Parlophone, Faith the only pop act on the label.

With his next two single releases, "Poor Me" (another chart topper) and "Someone Else's Baby" (a UK No. 2), Faith established himself as a prominent rival to Cliff Richard in British popular music.

A UK variety tour was followed by a 12-week season at Blackpool Hippodrome in the summer of 1960 and an appearance on the Royal Variety Show.

Faith's next release was a double A-side single, "Made You"/"When Johnny Comes Marching Home", which made the Top Ten, despite a BBC ban for "Made You" for 'a lewd and salacious lyric'. His 1960 novelty record "Lonely Pup (In a Christmas Shop"), to coincide with his Christmas pantomime, gained a silver disc.

His début album Adam was released on 4 November 1960 to critical acclaim for the inventiveness of Barry's arrangements and Faith's own performances. The material ranged from standards such as "Summertime", "Hit The Road to Dreamland" and "Singin' in the Rain" to more contemporary songs, such as Doc Pomus and Mort Shuman's "I'm a Man", Johnny Worth's "Fare Thee Well My Pretty Maid", and Howard Guyton's "Wonderful Time".

Still 20 and living with his parents, he bought a house in Hampton Court for £6,000, where he moved with his family from their house in Acton. In December 1960, he became the first pop artist to appear on the TV interview series Face to Face with John Freeman.

Faith made six further albums and 35 singles, with a total of 24 chart entries, of which 11 made the UK Top Ten, including his two No. 1s. Ten of the eleven singles that made the Top Ten actually also made the Top Five. Faith managed to lodge twenty consecutive single releases on the UK Singles Chart, starting with "What Do You Want?" in November 1959 and culminating with "I Love Being in Love With You" in mid-1964; this was quite a feat for a British artist of Faith's era.

Faith's last Top Ten hit in the UK (in October 1963) was "The First Time" (UK No. 5), which was also his first single with his backing group in 1963 and 1964, The Roulettes, acquired to give Faith's music a harder 'beat group' edge more in keeping with the Merseybeat sound at that time sweeping the British charts. His 1974 single "I Survive" made the Top 30 of the "Capital Countdown" on London's Capital Radio.

Benefitting from the enthusiasm of American audiences for all artists British at the height of the British Invasion in 1964–65, Faith managed to register one single in the Top 40 of the US Billboard Hot 100, "It's Alright" (which was not released as a single in his native UK).

In 1967, he recorded "Cowman, Milk Your Cow" which was written by Barry Gibb and Robin Gibb and released as a single in September that same year.

Film and television career
In 1961, Faith made What a Whopper, with Sid James, Spike Milligan, Wilfrid Brambell, Carole Lesley and others well known at the time. A film about a writer, a group of Englishmen and the Loch Ness "monster", it was written by Terry Nation, and had music by John Barry; Faith sang the title song and "The Time Has Come". Faith's teen pop became less popular in the mid-1960s in competition with the Beatles. After a final single in 1968 he parted company with EMI and concentrated on acting. While a musician he had appeared in films such as Beat Girl (1960), Never Let Go (1960) and television dramas such as the Rediffusion/ITV series No Hiding Place but now he concentrated on repertory theatre. After a number of small parts, he was given a more substantial role in the play Night Must Fall, playing opposite Dame Sybil Thorndike. In 1962 he co-starred opposite Donald Sinden and Anne Baxter in the film Mix Me a Person, a thriller which was rated X-certificate (the modern equivalent would be a UK 18-certificate) by the British Board of Film Censors. In autumn 1969, he took the lead in a touring production of Billy Liar.

In the 1970s, he went into music management, managing Leo Sayer among others. Sayer said in an interview with British newspaper The Daily Telegraph that "He handled everything for me, but although he was a very good mentor, he was less trustworthy with my money. In the end, Adam Faith made more out of Leo Sayer than I did."

He starred as the eponymous hero in the 1970s television series Budgie (LWT/ITV), about an ex-convict, but his career declined after a motor car accident in which he almost lost a leg. He restarted with a role as the manipulative manager of rock star David Essex, in Stardust. He was nominated for a BAFTA award. In 1980 he starred with Roger Daltrey in McVicar and appeared with Jodie Foster in Foxes.

He played the role of James Crane in the 1985 TV movie Minder on the Orient Express – part of the Minder franchise.

Later years and death
Faith married Jackie Irving in 1967 and they had one daughter, Katya Faith, who became a television producer.

By the 1980s, Faith had become an investor and financial adviser. In 1986, he was hired as a financial journalist by the Daily Mail and its sister paper The Mail on Sunday. Faith and partner Paul Killik were the principal investors behind UK television station Money Channel. When the channel closed in June 2002, Faith was declared bankrupt, owing a reported £32 million. English film director and producer Michael Winner stated that Faith was his investment adviser, leading to significant losses on two different investments.

In 1986, Faith had open heart surgery. In 2003, he became ill after his evening stage performance in the touring production of Love and Marriage at Stoke-on-Trent, and died of a heart attack early the next morning, 8 March 2003, at North Staffordshire Hospital. His last words reportedly were "Channel 5 is all shit, isn't it? Christ, the crap they put on there. It's a waste of space."