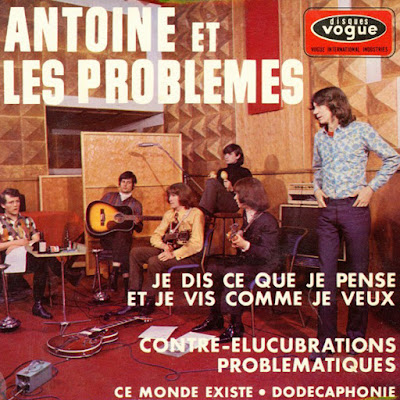 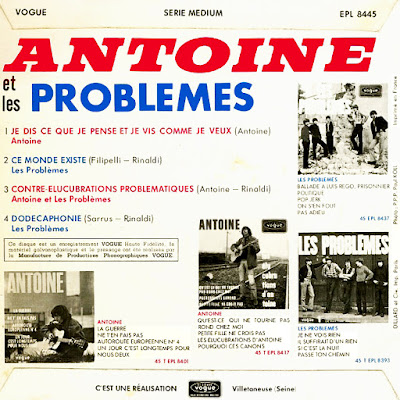 Antoine (the mononym by which Pierre Antoine Muraccioli is known) is a French pop singer, and also a sailor, adventurer, writer, photographer, and filmmaker.

As a musician, he was part of a new wave of mid-to-late 1960s French singer-songwriters, comparable in some ways to Bob Dylan or Donovan, but also evidencing some of the harder-edged garage rock style similar to The Rolling Stones, The Animals, and Them, and achieving some measure of pop stardom.

Beginning in the 1970s, he de-emphasized his musical endeavors (although he still writes and performs on occasion) in favor of a second career as a solo sailor and adventurer, which he has documented with many books and films.
Signing with the Disques Vogue record label in 1965, Antoine released his first single "European Highway Number 4" (French: "Autoroute européenne numéro 4"). In 1966 He released the EP Antoine's Fever Dreams (French: Les Élucubrations d'Antoine) against the advice of his producer Christian Fechner and Vogue management. The record, with protest songs and exhibiting a garage band style in sharp contrast to the yé-yé style then in vogue, resounded with the less carefree and more militant spirit growing among French youth (this was two years before the May 1968 events in France). Along with figures such as Jacques Dutronc and Michel Polnareff (and to some degree Ronnie Bird and Herbert Leonard), Antoine thus led a new wave in French music. The title song was Antoine's biggest hit.

Antoine's first full LP album was Antoine Meets the Problems (French: Antoine rencontre les Problèmes), made with the existing band les Problèmes[6] (who soon renamed themselves les Charlots and went on to long-term success, particularly in film). Some of the songs on the album were of Antoine and les Problèmes playing together, but many were by Antoine alone or les Problèmes alone, and many were previously released singles. One song on the album which became particularly associated with Antoine was "I'll Say What I Think and I'll Live How I Want" (French: "Je dis ce que je pense, je vis comme je veux")
In "Antoine's Fever Dreams" (the title song to the EP of the same name), Antoine, who represented with his emblematic long hair and flowered shirts[5] a new look and new sound, made fun of Johnny Hallyday (the "French Elvis",[8][9] a pioneer and icon of French rock and roll, but outdated in Antoine's eyes): "Things should keep on changing / The world would be much more fun / We'd see airplanes in the subway corridors / And Johnny Hallyday in a Circus Medrano zoo cage". Hallyday responded with an answer song "Long Hair and Short Ideas" (French: "Cheveux longs et idées courtes") ("If words were sufficient to make things so / Then he, with his long hair, and sitting on his hands / Would indeed have me locked in a cage...") and the two commenced a back-and-forth rivalry which redounded to the publicity benefit of both (Hallyday's song was a hit and helped revivify his career) and which continued in various songs and other forms into the 21st century (for instance, with each appearing in TV advertising for competing optician chains in the 2000s).