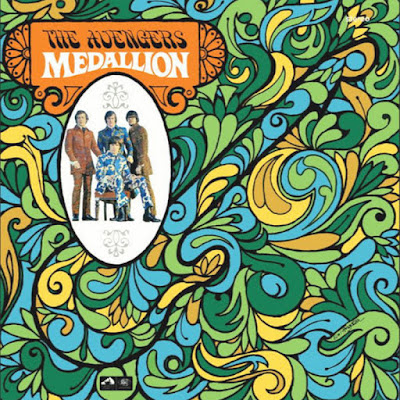 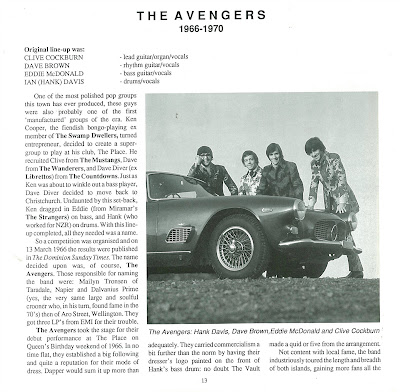 One of the most polished pop groups this town has ever produced, these guys
were also probably one of the first ‘manufactured’ groups of the era. Ken
Cooper, the fiendish bongo-playing ex member of The Swamp Dwellers, turned
entrepreneur, decided to create a super- group to play at his club, The Place. Herecruited Clive from The Mustangs, Dave from The Wanderers, and Dave Diver (ex Librettos) from The Countdowns. Just as Ken was about to winkle out a bass player, Dave Diver decided to move back to Christchurch. Undaunted by this set-back, Ken dragged in Eddie (from Miramar’s The Strangers) on bass, and Hank (who worked for NZR) on drums. With this line- up completed, all they needed was a name. 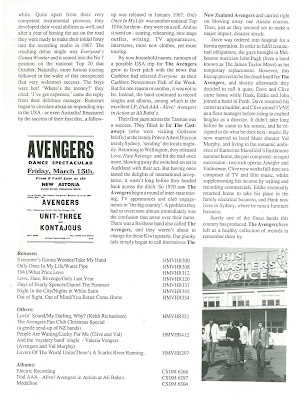 So a competition was organised and on13 March 1966 the results were published
in The Dominion Sunday Times. The name decided upon was, of course, The
Avengers. Those responsible for naming the band were: Mailyn Tronsen of
Taradale, Napier and Dalvanius Prime (yes, the very same large and soulful
crooner who, in his turn, found fame in the 70’s) then of Aro Street, Wellington. They got three LP’s from EMI for their trouble.

The Avengers took the stage for their debut performance at The Place on
Queen’s Birthday weekend of 1966. In no time flat, they established a big following and quite a reputation for their mode of dress. Dapper would sum it up more than adequately. They carried commercialism a bit further than the norm by having their dresser’s logo painted on the front of Hank’s bass drum: no doubt The Vault made a quid or five from the arrangement. Not content with local fame, the band industriously toured the length and breadth of both islands, gaining more fans all the while.

Quite apart from their very competent instrumental prowess, they
developed their vocal abilities as well, and after a year of honing the act on the road they were ready to make their initial foray into the recording studio in 1967. The resulting debut single was Everyone’s Gonna Wonder and it soared into the No 7 position on the national Top 20 that October. Naturally, more furious touring followed in the wake of this unexpected (but very welcome) success. The boys were hot! ‘Where’s the money?’ they cried. ‘I’ve got expenses,’ came the reply from their delirious manager. Rumours began to circulate about an impending trip to the USA – or even Australia!

Reassured by the success of their first disc, a follow- up was released in January 1967. Only Once In My Life was another national Top 10 hit for them – they were on a roll. And so it went on – touring, rehearsing, new stage outfits, writing, TV appearances, interviews, more new clothes, yet more touring. By now household names, rumours of a possible USA trip for The Avengers grew to fever pitch with the news that Cashbox had selected Everyone as their Cashbox Newcomers Pick of the Week. But for one reason or another, it was not to be. Instead, the band continued to record singles and albums, among which is the excellent LP, Dial AAA – Alive! Avengers in Action at Ali Baba’s.

Their first jaunt across the Tasman was a success. They filled in for The Castaways (who were visiting Godzone brieﬂy) at the trendy Prince Albert Disco in trendy Sydney, ‘sending’ the locals might-ily. Returning to Wellington, they released Love, Hate Revenge and hit the trail once more, blowing away the switched-on set in Auckland with their act. But having once tasted the delights of international acceptance, it wasn’t long before they headed back across the ditch. So 1970 saw The Avengers begin a round of inter-state tour-ing, TV appearances and club engagements in ‘the big country’. A problem they had to overcome almost immediately was the confusion that arose over their name. There was a Brisbane band also called The Avengers, and they weren’t about to change for these Kiwi upstarts. Our plucky lads simply began to call themselves The New Zealand Avengers and carried right on blowing away our Aussie cousins. Then, just as they seemed set to make a major impact, disaster struck.

Dave was ordered into hospital for a hernia operation. In order to fulfil contractual obligations, the guys brought in Melbourne musician John Pugh (from a band known as The James Taylor Move) as his temporary replacement. However, this hiccup proved to be the death knell for The Avengers, and shortly afterwards they decided to call it quits. Dave and Clive came home while Hank, Eddie and John joined a band in Perth. Dave resumed his ‘ career as a builder, and Clive joined TVNZ as a ﬂoor manager before rising to exalted heights as a director. It didn’t take long before he came to his senses, and he re- signed to do what he does best – music. By now married to local blues shouter Val Murphy, and living in the romantic ambience of Katherine Mansﬁeld’s Eastbourne summer home, the pair composed- in rapid succession – two rock operas: Jennifer and Valdramar. Clive now works full-time as a composer of TV and film music, whilst supplementing his income by writing and recording commercials. Eddie eventually returned home to take his place in the family electrical business, and Hank now lives in Sydney, where he runs a furniture business.

Surely one of the finest bands this country has produced. The Avengers have left us a healthy collection of records to remember them by. ~ http://www.wcl.govt.nz/wellington-music/index.php/2016/01/29/wellingtons-60s-scene-the-avengers/ 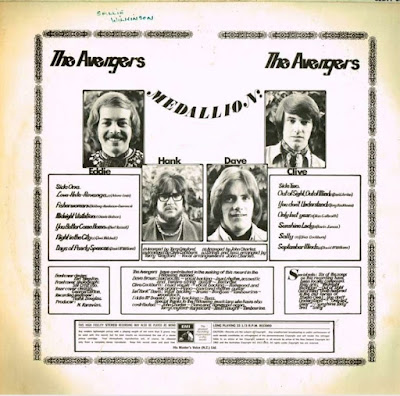 Email ThisBlogThis!Share to TwitterShare to FacebookShare to Pinterest
tags New Zealand, The Avengers