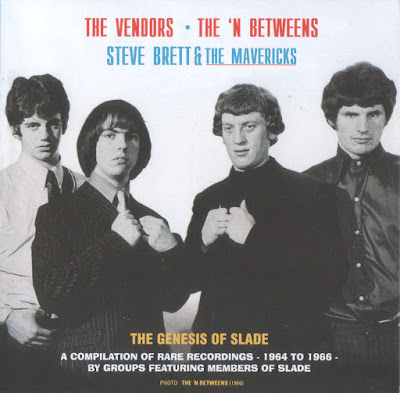 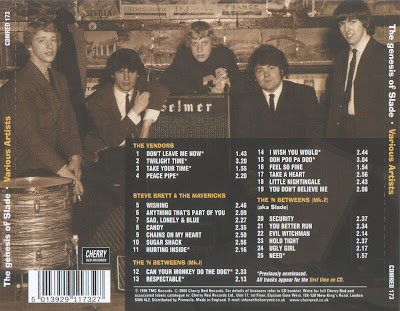 The Genesis of Slade is a compilation album by the British rock band Slade. It was first released in 1996 by The Music Corporation and was later re-issued by Cherry Red in 2000.

The first four tracks were recorded by The Vendors in June 1964, featuring Dave Hill on guitar and Don Powell on drums. They appeared on a privately pressed extended play. The seven tracks by Steve Brett & The Mavericks were recorded in 1965 and featured Noddy Holder on guitar and backing vocals. Six of the songs were featured across three singles, released by Columbia, while "Hurting Inside" was unreleased at the time. The 'N Betweens (Mk. 1) recorded eight tracks in 1965, featuring Hill and Powell. Four were pressed onto a private acetate and the other four were released extended play by Barclay. The 'N Betweens (Mk. 2) was made up of the four members that would later form Slade. All six songs were recorded in 1966. "Security" was released as a promotional single in America by Highland Records, while "You Better Run" was released as a UK single by Columbia. The compilation's last three tracks were recorded by the band with Kim Fowley, but were unreleased at the time.

One omission from the pre-Slade recordings is the 1967 unreleased recording "Delighted to See You". Produced by Norman Smith, the song first surfaced on the 1994 various artists compilation Psychedelia at Abbey Road - 1965 to 1969. The compilation's Cherry Red re-issue accidentally omitted "Hurting Inside", although it was listed as a track on the album.

Email ThisBlogThis!Share to TwitterShare to FacebookShare to Pinterest
tags Slade