The Roosters - All Of Our Days 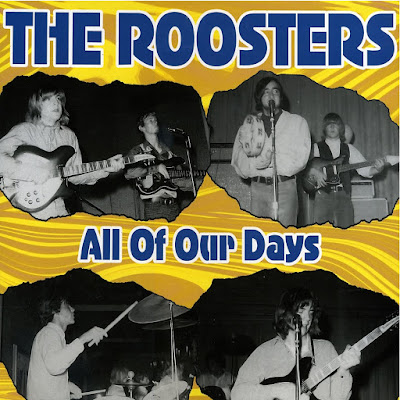 The Roosters have been known among fans and followers of the Californian mid 60s folk rock scene for a long time. Their "One Of These Days" b/w "You Gotta Run" 45 has been included on early garage compilations and is a huge favourite among collectors. Less well known is their second and at least as brilliant 45 "Rosebush" / "Ain't Gonna Cry Anymore".

Additionally there's a rare 1965 surf/mersey punk single released under the name "Five More", an early 1965 acetate put down as the Avengers and most of all, three 1966 stunning unreleased folk/garage janglers recorded at Gold Star Studio. This collection finally puts all these gems in one place and unravels the enigmas behind the band on a LP sized full glossy insert with a detailed history of the band emerging from the memoirs of guitarist and songwriter Timothy Ward and the bandOs vocalist Ray Mangigian.

This is embellished with a load of stunning never-before-seen photos. Finally here«s the legacy of an underrated, but excellent band direct from Los Angeles, the mid-Sixties epicenter of jangle  The Roosters!

Like the Turtles, the Roosters hailed from Westchester, California, where they began as a surf-type group before developing into a fantastic folk-rock outfit influenced by the Byrds, Beatles, and Hollies. In my humble opinion their two prime-era 45s are totally on par with the Dovers, and that’s saying a whole hell of a lot. Those on-a-roll Germans from Break-A-Way (United Travel Service, the Off-Set) apparently agree, and have cobbled together an LP’s worth of Roosters-related tracks anchored down by the two 45s the group recorded for the Progressive Sounds of America and Enith labels in 1966.

Many of you may have heard the very Byrdish “One of These Days,”? with its Jim McGuinn delivery and similarity to the Buffalo Springfield’s “We’ll See.”? The flip, “You Gotta Run,”? is a nice moody British influenced number that definitely holds its own. The group;s second single has “Rosebush”? on one side—a group vocal number with up-front 12-string, hints of fuzz buried in there, and great lyrics about how girls are all prickly and everything. Turn it over and you get “Ain’t Gonna Cry Anymore,”? snotty folk punk, with some Beatlesy harp. Also dug up are a few pretty danged baller folk/garage janglers recorded at Gold Star Studios. “Help Me Please”? is a fast movin’ teenie thing with an extended 12-string lead while “Deep Inside”? is a classy British-influenced gem. A later Phillips single from ’68 is also included, with a more polished pop sound.

Unfortunately, as the Roosters proper that’s all the group laid down, but Break-A-Way has included a rare 1965 Mersey surf punk single released under the name Five More and an early instro acetate by the Avengers to round it all out. Slipped in the photo-adorned cover is an insert with even more pics and the full story of the band as heard from surviving members. Don’t sleep on this, kids! (Erik Bluhm) 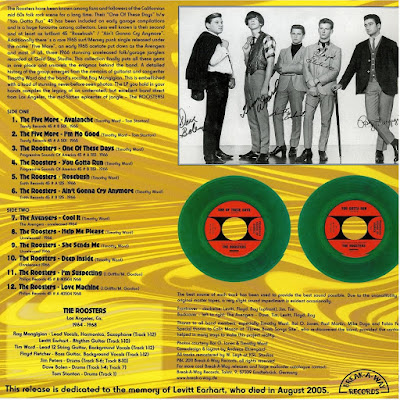