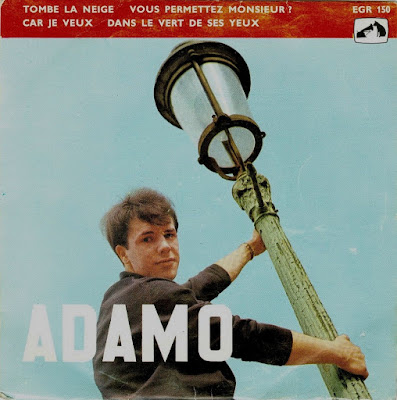 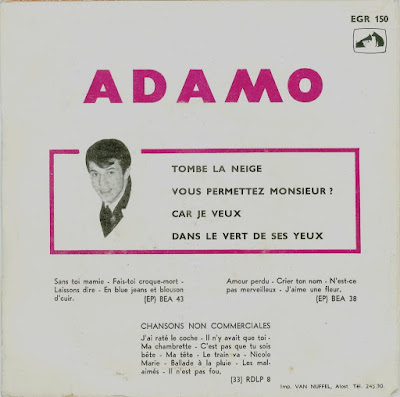 Salvatore, Knight Adamo Born in Comiso (Sicily) 1 November 1943, lived in Belgium since the age of 3, a singer and composer who has acquired the double Belgian-Italian nationality early 2019 at the age of 73. This Belgian musician and singer of Italian origin is known for his romantic ballads. Adamo grew up from a very early age in Belgium and has made that country his homeland. He first gained popularity throughout Europe and later in the Middle East, Latin America, Japan, and the United States. He has sold more than 80 million albums and 20 million singles making him one of the most commercially successful musicians in the world. He mainly performs in French but has also sung in Dutch, English, German, Italian, Spanish, Japanese, and Turkish. "Tombe la neige", "La nuit", and "Inch'Allah" remain his best known songs. He is currently the best selling Belgian musician of all time.
Adamo's first hit was "Sans toi, ma mie", in 1963, from his debut album 63/64. He followed this with a series of hits, the most famous being "Tombe la neige" ("The snow falls") in 1963, "La nuit" ("The Night") in 1964, and "Inch'Allah". The self-penned "Petit bonheur" ("Little Happiness") sold over one million copies by April 1970, and was awarded a gold disc.

Adamo has sold over 100 million copies of recordings worldwide. He has recorded in many languages and, besides France and Belgium, had hits in Italy, the Netherlands, Germany, Spain, Portugal, Turkey and also in Japan, where he toured repeatedly. He has had hits and toured also in Latin America and throughout the Middle East.

In Chile, the audience awarded him an appreciation prize known as the "Antorcha" (Gold and Silver Torch) at the "Festival de Viña del Mar" held yearly in the "Quinta Vergara", at the seaside resort of Viña del Mar, where he once had to sing in three different, sold-out venues in the same night. In the 1980s, Adamo's career faltered, as the style of his music was no longer fashionable. Since the 1990s, however, and on the crest of a nostalgia wave, he has successfully resumed composing, issuing records and touring, starting with a full season at the Casino de Paris venue in April 1990.
In 1984, Adamo had heart problems which necessitated a heart bypass operation and a temporary though total withdrawal from work. Since 1993, he has been an honorary UNICEF ambassador from Belgium and, in this capacity, has visited countries such as Vietnam, Lebanon, Bosnia, Kosovo, Afghanistan and others. In 2004, health problems forced him to cancel a scheduled tour but, since 2007, he is touring again. In December 2011, he performed in Espinho, Portugal and Bucharest, Romania.

At the end of the 1960s, Adamo married Nicole. Their children were Anthony (born in 1969), Benjamin, and then Amélie. At the height of his stardom, his own father died by drowning on 7 August 1966. His younger sister Délizia is also a recording artist. He wrote a number of songs for his sister, including her debut hit "Prends le chien" in 1974. She also joined him in his tour in 1975.