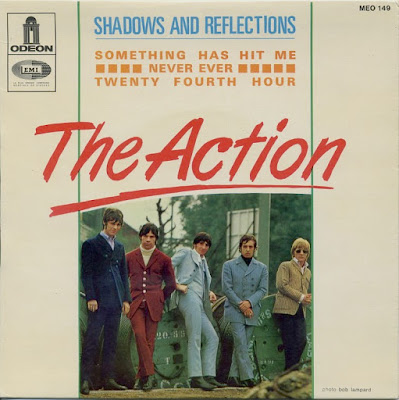 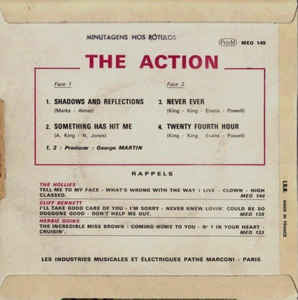 Shortly after their name change, they signed to Parlophone with producer George Martin. "Land of a Thousand Dances" b/w "In My Lonely Room" was well received by critics, but sold poorly. None of The Action's singles achieved success in the UK Singles Chart.

Dissatisfied with the stewardship of their manager Rikki Farr, Pete Watson left the band in late 1966. The Action continued as a quartet but were dropped by Parlophone in mid-1967, by which time they had also parted ways with Rikki Farr. They then assumed control of their own affairs, and soon afterwards keyboardist Ian Whiteman joined the band in an effort to expand their sound in order to help secure a new recording contract. By November, guitarist Martin Stone had also joined the band.

The Action now set about gathering original new material for a projected LP, but recording demos in a radically different Byrds-influenced psychedelic style failed to secure them their hoped-for recording deal (the 1967/68 demos were eventually released in the 1990s under the title 'Rolled Gold'). With the band seemingly having reached an impasse, and with vocalist Reg King's behaviour becoming increasing unpredictable, he departed the band in mid-1968. King's exit left Ian Whiteman and Alan King to share vocal duties, and at this point The Action decided on a brief change of name to Azoth. However the band soon reverted back to their old name and recorded a further set of five demos in the Summer of 1968, where they moved toward a more mid-tempo psychedelic ballad style and then into folk rock (these demos were eventually released in 1985 as "The Action Speaks Louder Than Words"). By January 1969 however, upon signing to Head Records (a fledgling independent label run by their former roadie John Curd), The Action was finally and permanently re-christened Mighty Baby.

A 1980 compilation of the Action's Parlophone tracks came with sleeve notes by Paul Weller ("The Action had it in their soul") and did much for their profile, while the Rolled Gold album demos were hailed as lost classics when they were reissued in the 1990s. In 1998, the original lineup of The Action reformed for a concert on the Isle of Wight. The band then played regularly over the next six years.

They are one of the favourite bands of Phil Collins, who performed with the reunited band in June 2000. "For me it was like playing with the Beatles", he later commented on the experience.

Email ThisBlogThis!Share to TwitterShare to FacebookShare to Pinterest
tags The Action