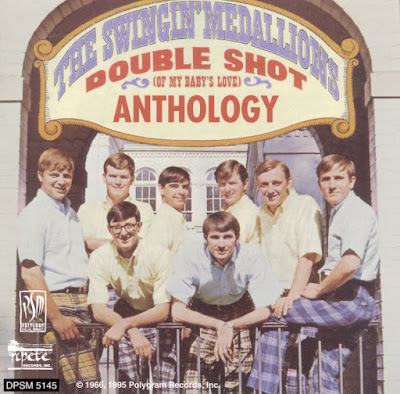 Not surprisingly, this album opens with "Double Shot (Of My Baby's Love)," and the two minutes and 21 seconds of inspired craziness that in 1966 gave the Medallions their sole taste of national fame. Three decades later, the number Bruce Springsteen once called "the greatest fraternity rock song of all time" still delivers the goods: a wonderful, cheesy-sounding organ; wild party sounds; and a deliberately sloppy vocal about how "it wasn't wine that I had too much of/It was a "double shot" of my baby's love." The rest of Anthology is a mishmash, and no wonder: despite the cover billing, only part of the album is by the original Medallions, who survived from 1963 to 1967. The rest comes from several successor bands, including the Pieces of Eight, a group formed in 1967 that contains several veterans of the original group; and a 1990s outfit that uses the original band's moniker but includes only one of its members. Which group performs which songs is often far from clear; the skimpy liner notes don't say, nor do they list any songwriters, vocalists in the original group, producers, or release dates. To further confuse matters, the album art includes a photo labeled "The Original Swingin' Medallions" that's captioned with the names in the 1990s lineup.

Quality and approach vary widely, as the various aggregations try everything under the sun to get back on the charts. One highlight is "She Drives Me Out of My Mind," an at least partly successful attempt to re-create the magic of ""Double Shot."" The only thing most of the other songs have in common with the group's hit, however, is that they're covers ("Double Shot" was first recorded by the obscure Dick Holler & the Holidays). Many of them -- including versions of Bruce Channel's "Hey Baby," the Tams' "What Kind of Fool (Do You Think I Am)," and the O'Jays' "Lonely Drifter" -- are memorable. And there are other highlights, such as "Shaggin' in the Moonlight," a polished nod to the dance craze from the Medallions' native South Carolina. But there are also such space fillers as "I Want to Be Your Guy," which sounds like a Jay & the Americans' outtake, and "Willie Don't Play That Saxophone," an inane comment on Bill Clinton. The album is worth buying, but you'll be glad your CD player makes it easy to skip a few of the tracks. 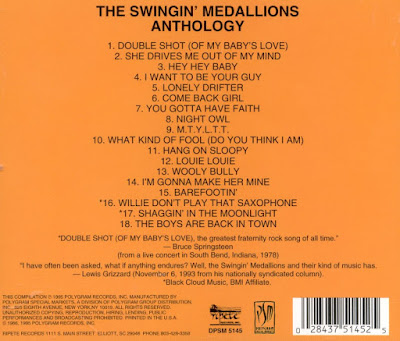