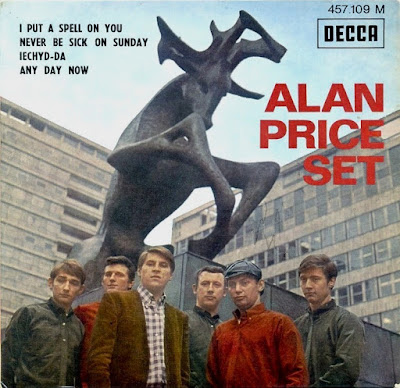 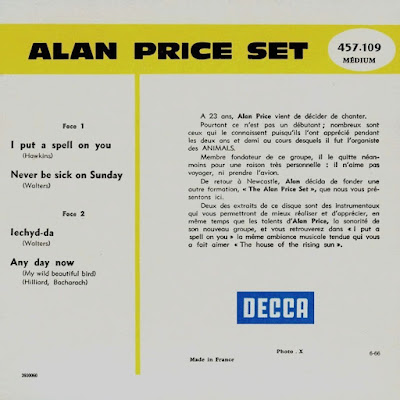 Price formed the Animals in 1962 and left the band in 1965 to form the Alan Price Set, with the line-up of Price, Clive Burrows (baritone saxophone), Steve Gregory (tenor saxophone), John Walters (trumpet), Peter Kirtley (guitar), Rod "Boots" Slade (bass) and "Little" Roy Mills (drums). In the same year, he appeared in the film Dont Look Back, which featured Bob Dylan on tour in the UK.

Price went on to host shows such as the musical Price To Play in the late 1960s, which featured Price performing and introducing the music of guests such as Fleetwood Mac and Jimi Hendrix. His second album, A Price on His Head (1967), featured seven songs by Randy Newman, who was virtually unknown at that time. In August 1967, he appeared with the Animals at the hippy love-in that was held in the grounds of Woburn Abbey.

A later association with Georgie Fame resulted in "Rosetta", which became a Top 20 hit (1971), reaching No. 11 in the UK Singles Chart. An album followed, Fame and Price, Price and Fame Together. During this period Price and Fame secured a regular slot on The Two Ronnies show produced by BBC Television, and also appeared on the Morecambe and Wise Show. He recorded the autobiographical album Between Today and Yesterday (1974) from which the single "Jarrow Song" was taken, returning Price to the UK singles chart at number 6.

Price participated in three reunions of the Animals between 1968 and 1984. In July 1983, the Animals started their last world tour. Price's solo performance of "O Lucky Man" was included in their set. In 1984, they broke up for the final time and the album Greatest Hits Live (Rip It to Shreds) was released, comprising recordings from their concert at Wembley Arena in London supporting The Police.